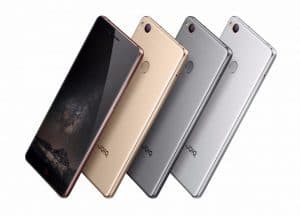 It’s finally the day when the ZTE nubia Z11 becomes official. Today at an event in China the company unveiled its latest flagship smartphone, and the last member in the Z11 family which already comprised the Z11 mini and the Z11 Max.

Unlike those two, however, the Z11 comes with true flagship-level specs all-round (with one glaring omission – a QHD touchscreen).

The phone has an all-metal construction and a nearly bezelless display, both things that are guaranteed to catch the eye of the prospective smartphone shopper. It is powered by Qualcomm’s Snapdragon 820 chipset, aided by either 4GB of RAM and 64GB of built-in storage, or a whopping 6GB of RAM and 128GB of internal space. In both cases you get a microSD card slot too, along with dual-SIM functionality.

The main camera has 16 MP resolution and Sony’s IMX298 sensor, with OIS, phase detection autofocus, f/2.0 aperture, and a sapphire protection lens. The selfie snapper is an 8 MP unit with 1.4 micron pixels, f/2.4 aperture, and 80-degree wide-angle field of view.

The screen is 5.5 inches big and comes with 1080p resolution. It’s covered by Gorilla Glass 3. The battery capacity is 3,000 mAh (Qualcomm Quick Charge 3.0 is supported), and the nubia Z11 runs Android 6.0 Marshmallow underneath ZTE’s nubia UI 4.0. A fingerprint sensor is present on the back of the handset and will reportedly unlock it in 0.1 seconds.

The nubia Z11 will become available in China in the colors you can see above on July 6. The standard version (with 4GB of RAM and 64GB of storage) is priced at CNY 2,499 ($375 or €340). The top of the line model with 6GB of RAM and 128GB of built-in storage space will go for CNY 3,499, which is about $526 or €476. As always when it comes to nubia devices, whether this will ever officially be sold outside of China is anyone’s guess. You probably shouldn’t hold your breath, though.