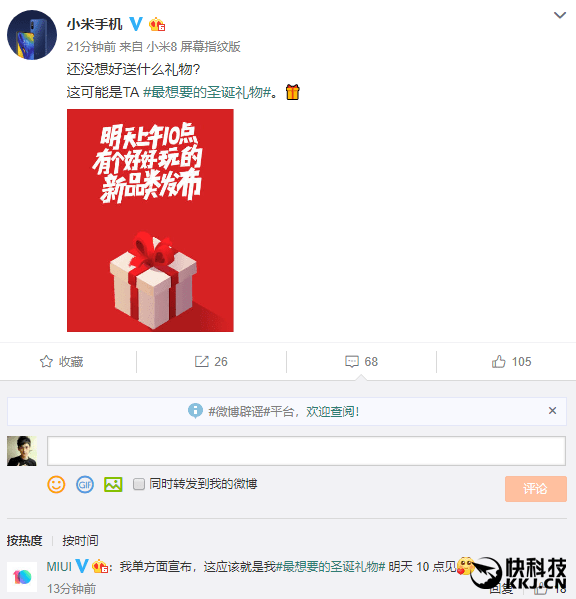 Xiaomi has today announced on the Chinese social media platform Weibo that the company will be launching a new fun category tomorrow at 10:00 AM. On its own website, the company teased the fresh release saying “I unilaterally reported that this need to be my most wanted Christmas gift. View [you] at 10 o’clock tomorrow.”

Rumors suggest that the Mi Enjoy smartphone is the rebranded variant of Pocophone F1 for the Chinese market. Earlier, we announced that Xiaomi may hold a release event for the Mi Pay between December 17 and December 26.

Xiaomi had initially released the Poco F1 in the Indian market in August and was later launched in other markets as Pocophone F1. Recently, the company unveiled that it has sold above 700,000 units of the Poco F1 in the past three months.

As for the specifications, the Poco F1 sports a 6.18-inch IPS LCD notched display that produces Full HD+ resolution and a layer of Gorilla Glass for protection from minor scratches. Under the hood, the gadget is powered by Qualcomm‘s Sd 845 flagship processor and arrives with LiquidCool tech.

As for the photography, the device comes with a 12-megapixel Sony IMX363 primary camera, coupled with a 5-megapixel secondary scanner on the back screen. On the front side, there’s a 20-megapixel selfie camera powered with artificial intelligence for capturing enhanced selfie images.

The phone comes with 6GB/8GB of RAM and 64GB/128GB/256GB of internal storage, depending on the version. It runs on the company’s MIUI with Poco Launcher, based on Android 8.1 Oreo operating system and is powered by a 4,000mAh battery that supports Fast Charge 4.0 fast charging tech.

To have idea for Of course what’s up the company’s sleeves, we’ll have to wait till tomorrow after Xiaomi formally revealed its ‘fun’ device.