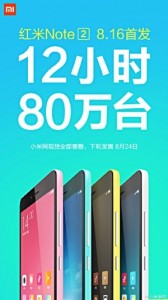 Xiaomi has managed to sell around 800,000 units of the Redmi Note 2 phone in just 12 hours, which is said to be a new record for domestic mobile sales. The device, which was announced in China last week, was up for flash sale in the country yesterday.

In terms of camera, the Redmi Note 2 features a 13MP rear unit and a 5MP front shooter. There is also dual SIM support, 802.11ac Wi-Fi, and IR blaster, and the device runs the new MIUI 7 out of the box.

The second batch of the smartphone will go on flash sale next week on August 24.