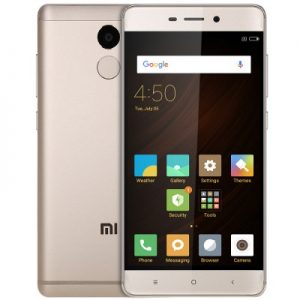 As you can see at first looke they’re absolutely identical.
If you look closer to you will see little difference.
But let’s first start with the hardware.

The Redmi 4 has CPU Snapdragon 430 with s 2 gigs of RAM and 16 gigs ROM.
The other one – Redmi 4 Pro has CPU snapdragon 625 with 3 gigs of RAM and 32 of internal storage.
The both phones are in nice soft golden in color.
The displays are 2.5 and there are bezel-less. They look very nice, very sophisticated, fashion and modern.
Now let’s make closer look at the physical differences. So let’s start from the back.
On the Redmi 4 LED flash is on the right next camera. It is monochrome color dual LED.
On Redmi 4 Pro the flashlight is on the left side nect to camera and it’s dual color LED.
If you look more carefully you will see that the top and the bottom antenna dividers different.
Let’s now see the sides. There look identical as the bottom where are the microphone and the speaker.
The top the side has differents. As you can see the place of the additional microphone is switched.
Also the 3.5mm headphone’s plug is moved a bit.
So enough about design differences

The first thing that I noticed after boot on the Redmi 4 is that th fingerprint can wake up the screen when you touch it.
Also it can shoot images from the selfie camera. It’s really great feature so I thought that the Redmi 4 Pro will has it too.
But for my surprise it doesn’t has this feature. Which is strange because this phone is more expensive.
Anyway let’s run some tests on both phones.

Also you can watch my video.

And here is the results:

Also you can see my video running Antutu test here:


You can watch whole Antutu test in Youtube here:

As you can from the tests there is big difference between both phones.
Only the boot/reboot of Mi5 Pro is much slower.
But seriously, who will reboot these beasts often?

Check the images I made (Click on the pics for full image).


As you can see from the samples the cameras are identical

The video quality was good enough in good light conditions and noisy in low light.

Now is the time for audio tests.
I played different types of music trough air-speaker and with headphones on both phones and they perform good (for the price).