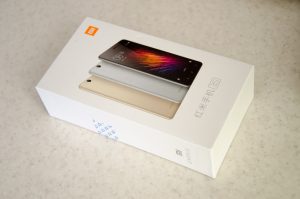 the first thing I’ve been noticed when I opened the box was the amazing golden color of the phone.
It looks really stylish and luxury.

Here is what I’ve got in the box: As you can see the device looks pretty much as the Redmi 3.
But the secret is under the hat

It’s powered by the new Snapdragon 430.
Also it’s equipped with fingerprint scanner which give easy phone screen unlock options.
In my experience fingerprint unlock works not in 100% of cases but about 99%.
Anyway it’s really useful feature.

It will take longer time (1min) because the smartphone configurates the OS.
After start lets check is what languages are included.
As you can see there are plenty of them include Italian. The first time I set the fingerprint password I had an issue: It ask to click to Continue but you cant until the keyboard is ON.
i needed to hide it to be able to proceed.
I think this is the problem with the installed TouchPal keyboard.

The features are the same as in Redmi 3.
The led light notification is real cool.
You can chose the color but also the led doesn’t just blink but fading out

The other cool feature is the build-in call recording. You can manually turn it on during the call or automatically turn it on for all calls or for selected ones.
It’s a great feature I didn’t see this in other phones! The other cool feature is the blinking the flash during incoming call (iPhone style).

But lets see some benchmarks tests: As you can see the results are almost the same in Geekbench 3 comparing with Redmi 3 but the real advantage of Qualcomm Snapdragon 430 is the GPU!
And this is clearly viewed from the Antutu 3D score – 7274 for Redmi 3S vs 2135 for Redmi 3.
The GPU score hit the sky!
It’s almost 3.5 times higher!
The numbers are the numbers but let see the real game play

As you can see the game runs smoothly without lags!
So yes, the phone is good for 3D games too.

Note: this is the first charge so it could take longer time.

About camera I can tell that even it is the same as in Redmi 3, I feel it more quality.
But i think the reason for this improvement is the Android 6 and the new Camera API.
So lets see the samples: I’ve made some selfie pictures and I find them very nice.
But I miss the shutter feature with fingerprint sensor as it is in Redmi Note 3.
The camera makes video in full HD format too.
The quality is nice when there is a lot of light and average in low light conditions.

About audio sound I see (hear) some improvements comparing to Redmi 3.
Especially if you use Xiaomi headsets!
But I suppose this is also Android 6.0 linked.

The battery is very good even using 4G (LTE).
Here is some speed test (In my country is a bit slow) In conclusion i can tell that Xiaomi Redmi 3S is great upgrade over Redmi 3 at the SAME price!

P.S.
It’s surprise for me but the device is with unlocked boot loader!
Dont know is it officialy unlocked or 3rd party but actually i dont care

So I can install easily TWRP and latest (MIUI 8) muilty language ROM from Xiaomi.eu
Will inform you later about that. Watch the thread.