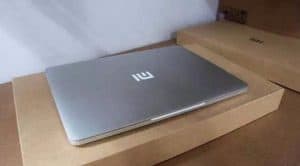 News emanating from China indicates that Xiaomi will release its expected Xiaomi Notebook laptop on July 27. We had earlier reported of a Xiaomi news conference coming up on July 27 where the company is expected to release a series of phones, including the dual-camera clad Redmi Note 4, Mi Note 2 and other mobile gadgets.

According to fresh reports, Xiaomi will officially launch its Notebook laptop during the news conference. The Xiaomi Notebook is expected to cram an Intel Atom processor and will boot Windows 10 operating system. One unique feature of the Xiaomi Notebook is its ultra-slim built, as well as long battery life.

Earlier rumors had indicated that the Xiaomi Notebook laptop is expected to come in three display variants, 12.5-inches, 13.3-inches and a 15.6-inch model. The small display variants are expected to hit the market first. The slim device also packs a webcam just like on the MacBook.

Xiaomi’s CEO Lei Jun had taken to Weibo to share the company’s lofty plans for the second half of the year to launch a series of devices in H2 2016 and now, the list of devices popping up into the market on July 27 keeps swelling. Could we see more devices coming out? That we don’t know, what we know is the Xiaomi Notebook may have just joined the list of devices launching July 27.