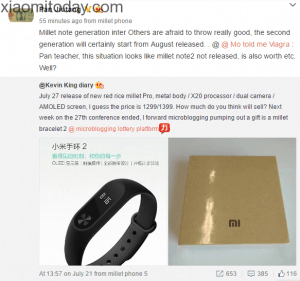 Xiaomi is going to be hosting a press conference in Beijing on July 27th to launch the Xiaomi Redmi Pro, previously called the Redmi Note 4. However, a lot of Xiaomi fans are waiting for the rumored Xiaomi Mi Note 2 and the Xiaomi Mi5s that are expected to be the most high-end phones the company has ever produced. Talking about the Mi Note 2 release date, the device may launch in August.

Popular Chinese analyst Pan Jiutang posted on microblogging site Weibo that the Xiaomi Mi Note 2 will be released in August. Liwan Jiang, Xiaomi’s Co-Founder, had said in a previous interview that the Chinese manufacturer will be launching high-end products in August. So it seems like analyst Jiutang is correct in predicting the August launch date for the Mi Note 2.

Talking about the Xiaomi Mi Note 2 specs, it is being said that the phone will be powered by Qualcomm’s Snapdragon 821 processor. The screen size will be more than 5.5 inches, and the device may offer 6GB of RAM. Apart from that, features like dual cameras and curved screen may also be seen.

Recent rumors suggest that the Mi Note 2 may be priced more than CNY 3,000 ($449) and may come in several variants. This device may become the most expensive smartphone Xiaomi has ever made. Meanwhile, let’s wait for more information to leak out before making wild guesses.