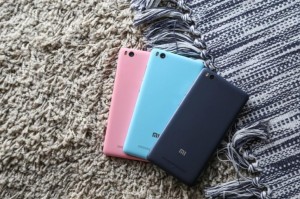 Tomorrow, Xiaomi is set to finally take the wraps off the much talked about Mi 4c. This will basically be China’s version of the Mi 4i which debuted in India a few months back. That said, the Mi 4c does feature a couple of upgraded specs compared to the phone it’s based on.

Now that we’re less than 24 hours from the announcement, some images showing three color variants for the Mi 4c have been leaked.

At this point it’s not clear whether these three are the only hues the Mi 4c will be offered in. Chances are there will be more, however – if not initially then in time.

As you can see, the outer shell of the Mi 4c is identical to that of the Mi 4i, including the plastic it’s made from. On the inside, the Mi 4c will sport Qualcomm’s Snapdragon 808 SoC with hexa-core CPU, a step up from the Snapdragon 615 in the original. While the cheapest version will have 2GB of RAM and 16GB of storage just like the Mi 4i, there will also be a more expensive Mi 4c with 3GB of RAM and 32GB of space. A 64GB model could be in the works too.

The Xiaomi Mi 4c will have a 5-inch 1080p touchscreen, a 13 MP rear camera with dual-LED flash, a 5 MP selfie shooter, LTE, as well as a 3,120 mAh battery. It’s been rumored to run Android 5.1.1 Lollipop underneath the Chinese company’s own MIUI 7 layer.