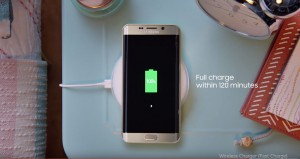 Through a USB cable, that duration will come down to 90 minutes, which is as impressive as the charging time on the wireless pad. Furthermore, you still get support for both popular wireless charging standards, Qi and PMA. We don’t know how long the Note 5 and S6 edge+ will last on a single charge, but if the endurance isn’t great, it’s nice to see we will at least have fast charging no matter if we use a USB cable for it or not.