You maybe don't know but Haylou is a child company of Xiaomi and they make high-quality products that everyone should be look for.

Let's see what is inside the box:

[gallery link="file" columns="2" size="medium" ids="41199,41200"] We have a user manual, both earphones in a small box and extra rubber buds the rubber buds are cone shape. they feel nice and soft to touch. the manual tells us everything we need to know about how to set them up right. [gallery link="file" columns="2" size="medium" ids="41201,41202"] And here are the button functions it even tells us how to wear them. The case itself looks nice but it doesn't have a lid, unfortunately. I personally prefer cases with lids for a bit of extra protection Around the sides of the case there's not much to see at all but under is something very interesting because this case doesn't have a charging port at all! it's got a built-in USB cable for charging and it's stuck in under here. So whenever we need to charge we can just pull the cable out and are we ready to charge. Now when it's done just put it back in its spot. This eliminates the need of bringing in the extra cable so that's nice! Charging it from zero to full takes about 2 hours. The case battery capacity is 380mAh which provides about 11 hours extra charge. It does not support quick charge so using a phone charger or any other quick charger is useless. 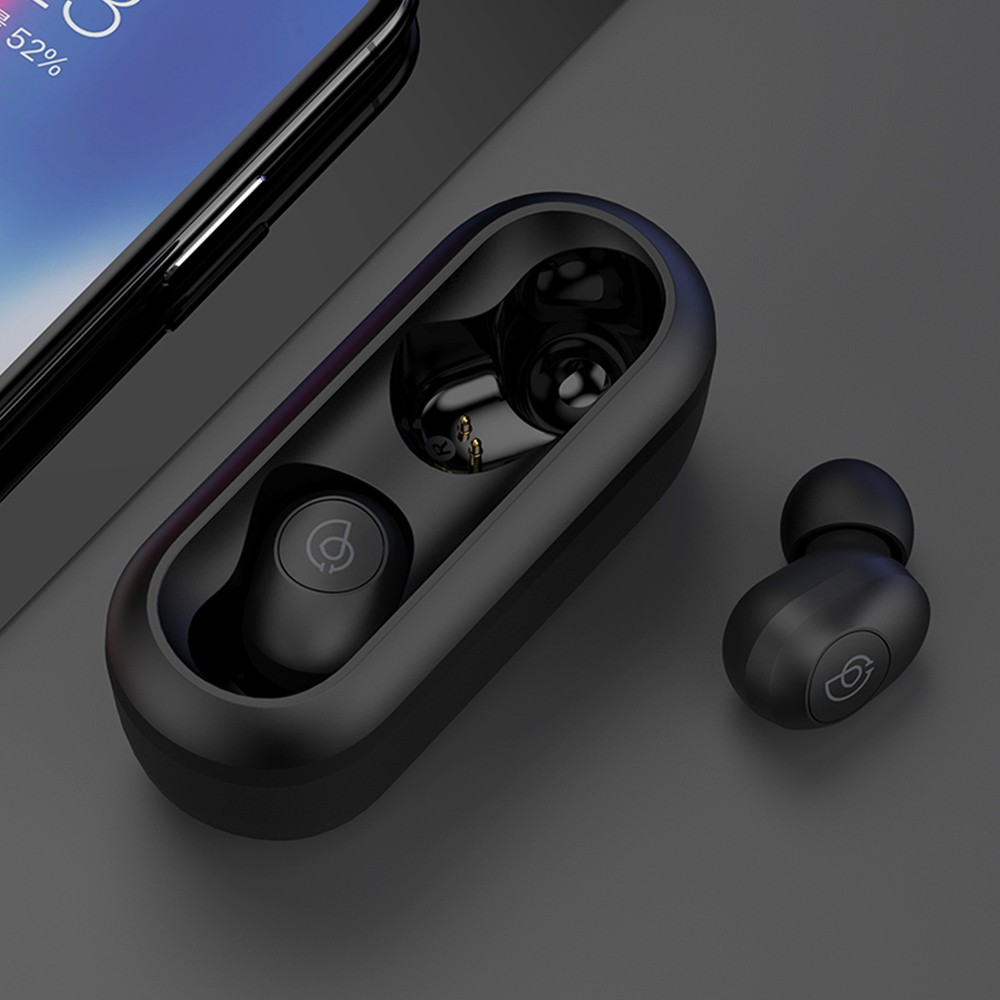 By removing the earphones we can see the charging connectors at the bottom. The buds themselves look simple but nice with a black matt finish. There is a push-button on each of them the buttons. They are not too hard but the earphones will go a bit into the ears when pushing them. it's not uncomfortable even though the earphones are a quite small weighing, only 3.7 grams each. 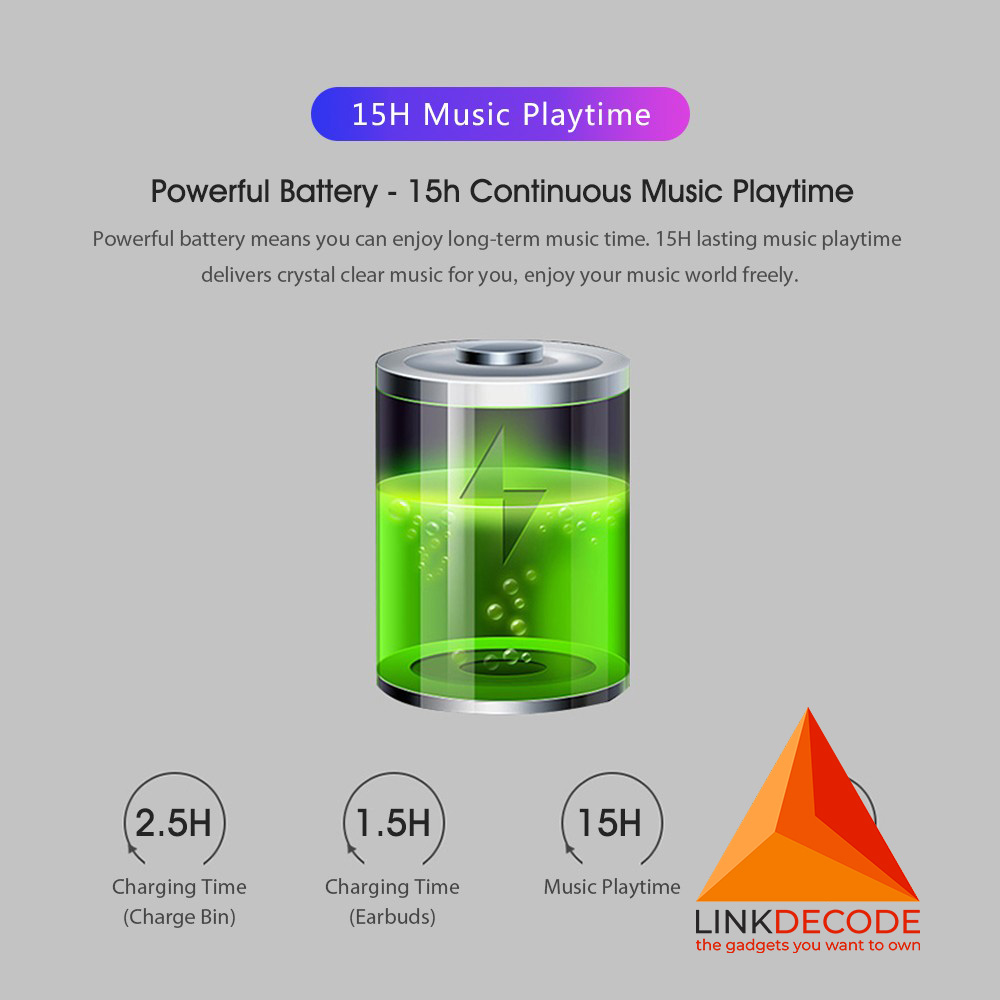 The battery lasted me 4 hours on loud volume which isn't bad at all. If you include the case you should get about 15 hours total. They also have lights to show us when they are charging. On the front of the case is another light that's only visible when the case is charging the one light on.

To pair them with the phone you need to take them out of the case and select Haylou R (right). After that, the left one will pair automatically. 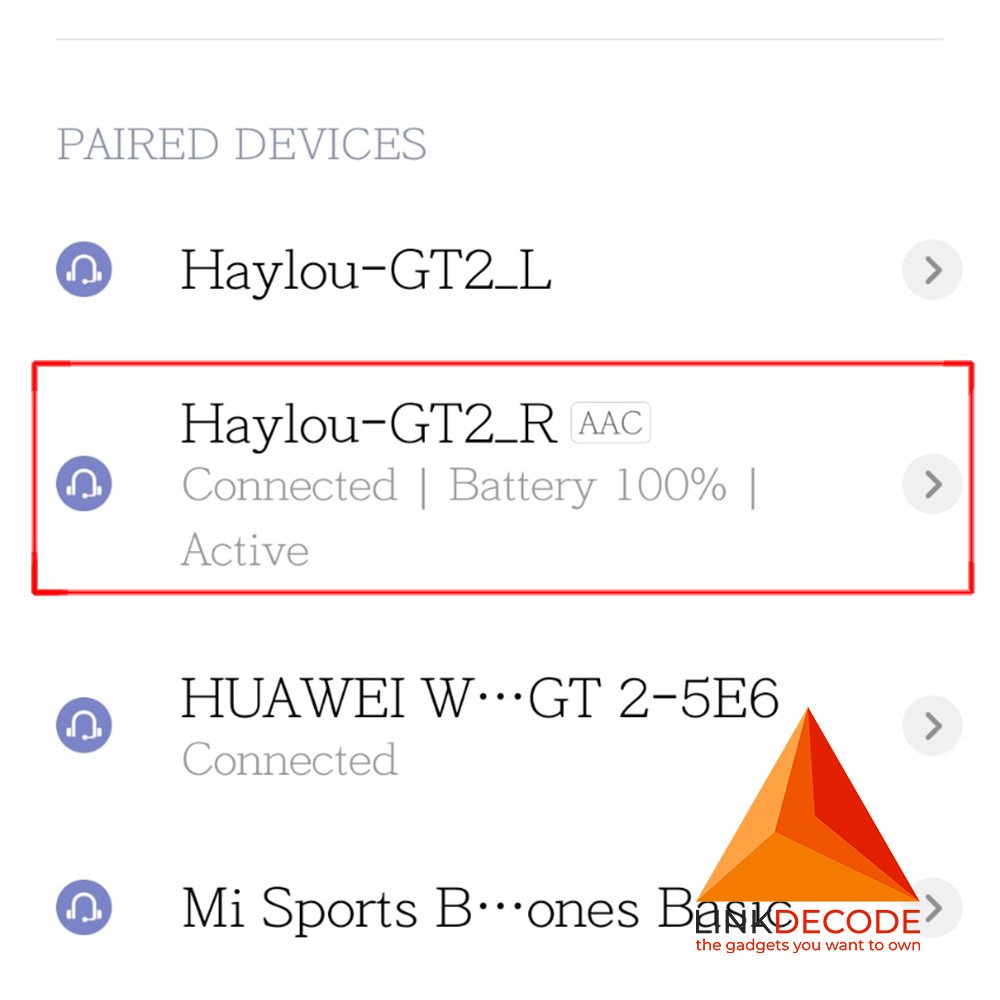 When done we can see the earphones remaining battery on the phone. The next time we take them out of the case they will reconnect automatically so all we need to do is take them out and wait a bit. 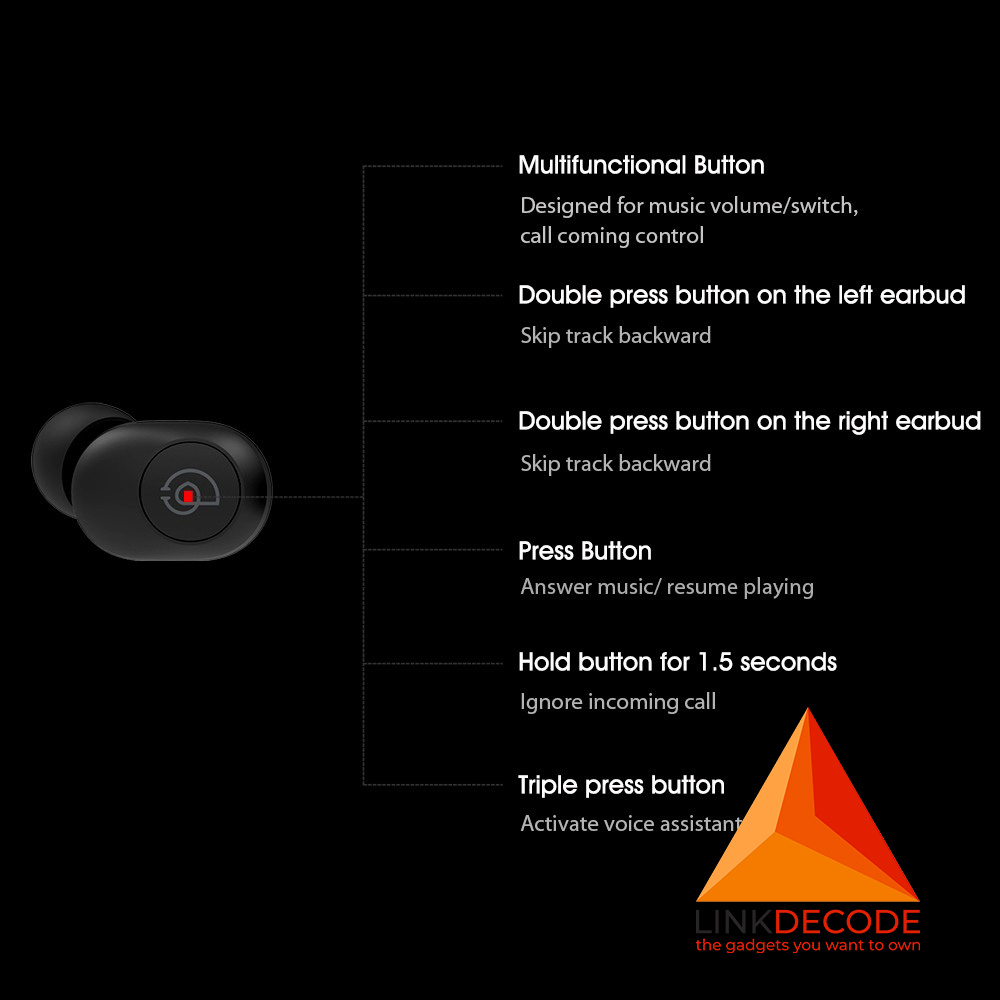 For controlling music, we can push the button once to play or pause. This works on both the left and right sides. To go back click the left earbud twice or twice on the right one to go to the next song. Clicking three times will open the Assistant. The gt2 are very comfortable to wear and they are very light so they will see it very well in the ears and since they are so light they don't pull out of the ears. The microphone is okay but there is some background noise for the person on the other end it almost sounds like using a hands-free in a car. Regarding delay or latency, it's not very noticeable in videos but I wouldn't use them for fast gaming sound quality. 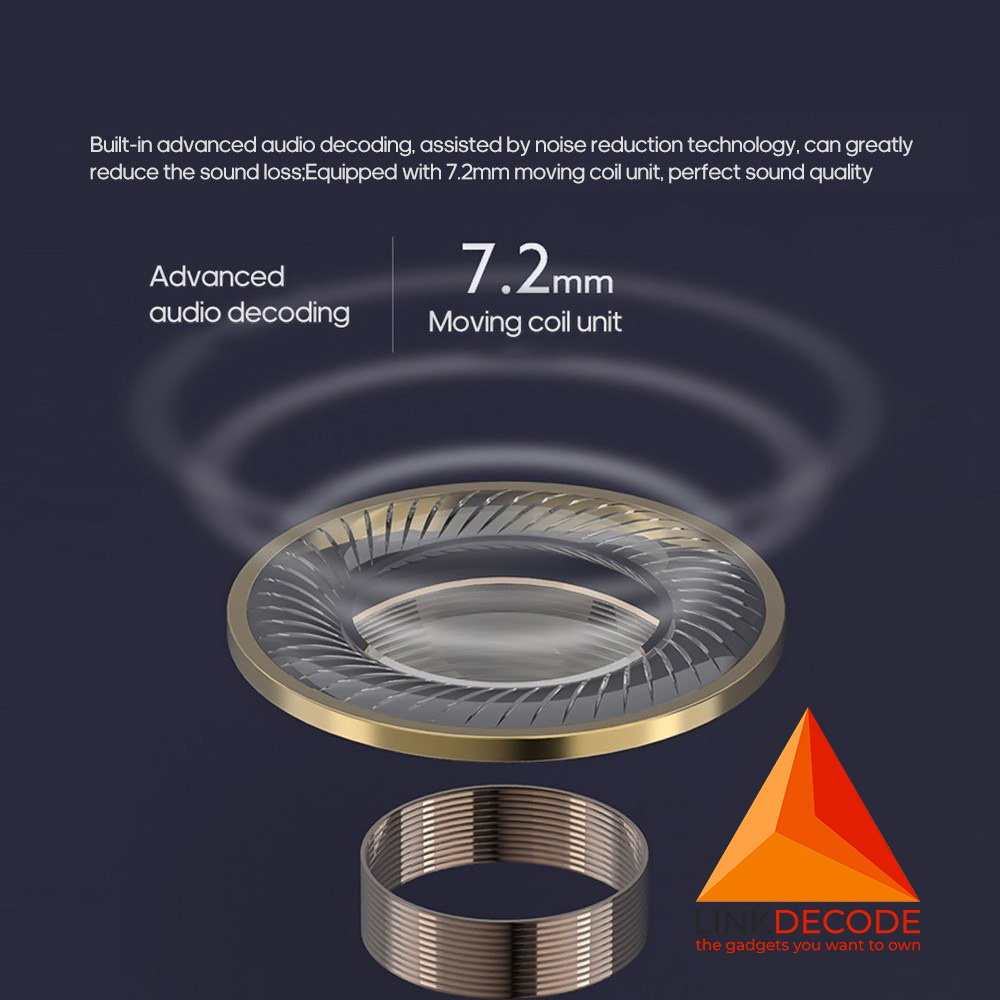 Thanks to the big driver unit (7.2mm) Vocals sound nice and clear even at higher volumes but can sometimes be a bit tinny in the mid-range. It's not something that bothered me at all but it's worth mentioning the bass is good on punchy but it's not going to be enough for the most bass hungry people :) The volume also goes more than high enough for me :)

Can I use Xiaomi Haylou gt2 for sport?

Today I decided to swap my Meizu EP51 headset in the gym to test can GT2 be useful for sport. And I was really surprised! For an hour of my workout, I didn't feel any uncomfortable wearing Haylou gt2. They didn't slip from the ear thanks for the lightweight. I think I'll keep them for my workouts!

Haylou gt2 headphones are actually quite good! Overall a nice product from Haylou at a very affordable price. Easy to carry and they are good for sport! Last time I checked the gt2 was only it's 20 EUR so it's a bargain in my opinion You can get them from TomTop Xiaomi Haylou GT2 TWS BT Earphones And currently, the prize is even better with this coupon discount:

Smartphone World Cup: Groups A and B

Our Smartphone World Cup has begun - starting today the first two groups of four will vie for your attention. Check out the announcement post for more details, but the plan is fairly simple. Each group consists of four phones, you vote for your favorite one and the top two qualify for the knockout stage. Group A It's two flagships vs. two popular mid-rangers. LG's latest G7 ThinQ launched months after the MWC crowd and hasn't had much time to gather a following. On paper it does everything right - it's rugged, it's powerful, it has a high-quality screen and Hi-Fi audio hardware. The...

Verizon has started pushing out a new update to Samsung Galaxy Note 4 units on its network. The update arrives as software version MMB29M.N910VVRS2CQE1, and brings along fix for the BlueBorne vulnerability. The vulnerability allows a remote attacker to take control of your device via Bluetooth. The process does not even require the device being attacked to be paired to the attacker's device, or even to be set on discoverable mode. As for other changes included in the update, the official Verizon website only says "most up to date Android security patches," so we are expecting the...

It's been a while since Samsung launched a high-end tablet, but the wait could be almost over. A couple of days ago an upcoming slate from the Korean company was spotted in a benchmark and based on its model number it's assumed to be the Galaxy Tab S4. Now it's been caught in another benchmark, HTML5Test, where its screen aspect ratio is confirmed as being 16:10. That's a bit odd considering that the Galaxy Tab S3 from last year used the 4:3 aspect ratio. It looks like Samsung decided it was time for a change. When you look at the screenshot above, keep in mind that HTML5Test...

Xiaomi teases the Mi A2 ahead of launch

Xiaomi is launching the stock Android version of the Mi 6X on July 24 in Madrid, Spain. The phone will arrive as Xiaomi Mi A2 and the manufacturer just teased it on Twitter, saying all Mi A1 fans "will love this" while posting an image of the actual Mi A1 with the number 2 visible in the background. This image is the first time Xiaomi actually uses the number 2 in its promo communication since the text also had the hashtag #2isbetterthan1. Although Mi A2 is not a surprising moniker, it's good to have that officially confirmed. The Xiaomi Mi A2 is coming with 5.99" Full HD+ screen...