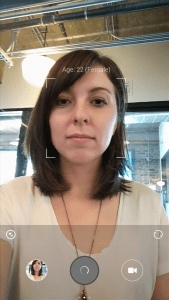 Xiaomi doesn’t stop surprising its fans. Its smartphone, Mi Note, was released with a selfie-camera algorithm, which aims at figuring out the age and the gender of a person, who makes a selfie. The reporters, who were present at the event, tested this technology in practice. The results were amazing.

Some of the people, who were really 30-40 years old, were marked by Xiaomi Mi Note as those, who are 25-30 years old. However, with the really young people, the situation was absolutely different – they were made ‘older’ by the smartphone. It guesses the gender correctly in all of the cases.It’s a surprising fact, but Xiaomi is really close to technology innovations in this field. It has managed to launch a product, which guesses, who is in front of the cam and how old he or she is, even much better than the Microsoft’s website does, which was announced almost a year ago. The ‘mistake’, made by Xiaomi is less than 10 years in the majority of cases. This is a good sign, which definitely places this company on the first places in the tech-industry.

Except the ability to guess your age/gender, Xiaomi also can edit your photos, in order to make you look better, automatically. This makes working with this smartphone much simpler and brings more fun.