This year at MWC 2019, various manufacturers showcased their abilities endeavouring the new 5G technology. Majority of the manufacturers noted the 5G supported products which are slated to make first public appearance in Q2 2019. In newest, Sony has joined the list of long waited 5G backed products with its prototype smartphone. The fresh device has been showcased at the MWC 2019 in Barcelona at Sony and Qualcomm booths.

It looks a decade of new technologies have just started with the announcement of folding smartphones from Samsung and Huawei. On the other hand, 5G tech support is gaining pace, and the first batch of compatible products have made an appearance at the Mobile World Congress. 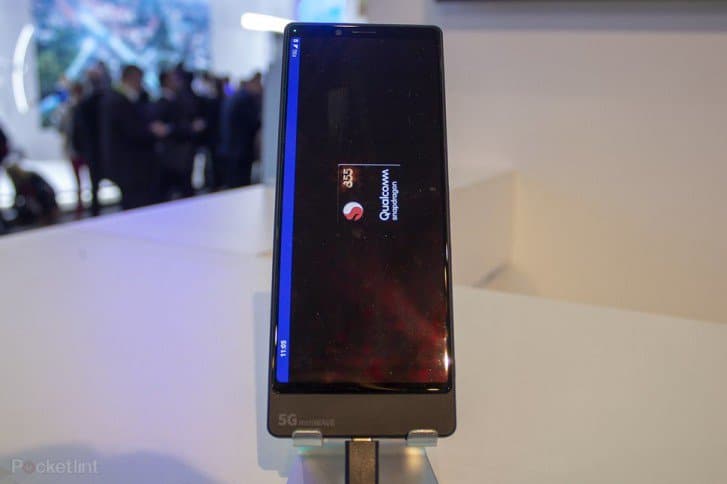 As per our folks at Pocket-lint, they have spotted a Sony 5G prototype smartphone at both Sony and Qualcomm booths. It was unlikely to get the full information about the device by just looking at it as the gadget was encased. Later talking to Adam Marsch, Sony’s global communications team, our source arrived to have idea that it is not a commercial but a testing smartphone. Although, they even confirmed that the real models would differ from the current prototype. Now, multiple products with minor hardware changes are going through alternative tests. The real purpose of minor hardware changes is to“trying to understand [what would happen] if you take an antenna away from a certain place and make it thinner”.

The prototype models are running on Qualcomm Snapdragon 855 chipset. It is even going that the manufacturer would have coupled Snapdragon 855 with the X50 5G modem. The panel measurements were not out there, but it showed 21:9 aspect ratio. Sony has labelled the new device as “AG-1” internally as told by Adam Marsh. It uses 5mm wave for the 5G transmission along with sub 6 spectrum support.

It has been guessed that Sony might come with a commercial 5G smartphone at IFA 2019 in September. It might be another version of recently unveiled Sony Xperia 1 what runs Snapdragon 855.