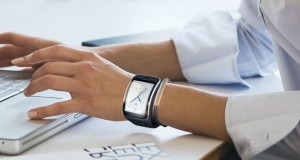 A new patent was recently unveiled by Patently Mobile according to which Samsung is working on a new smartwatch display that changes its position to accommodate the user. This is a very interesting concept that might open the way to some new features. Last year Samsung registered a lot of original concepts. A while ago we reported on another patent which detailed that Samsung wanted to add some additional touch controls on the side and backside of its future smartphones. They’re definitely working on improving user experience, and this new patent would make your viewing experience very comfortable. It basically works in a similar manner to a flip phone: the display raises itself at a particular angle for better viewing.

Why would this be useful? Well, it could take some quick pictures, it would be easier to look at your display and it would also make calling easier. The true use of this design appears in a driving situation where it would allow you to see your screen easier without moving your hand from the wheel, so it would improve driving safety.