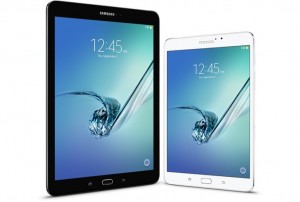 Starting today, residents in India can pick up the latest high-end tablet from Samsung, the Galaxy Tab S2 9.7. The tablet is available for purchase exclusively from Samsung’s online retail store in either Black, Gold or White for INR 39,400 ($595).

For those in need of a specification refresher for the Galaxy Tab S2 9.7, it features a 9.7-inch QXGA Super AMOLED display, a 64-bit Exynos 5433 octa-core processor with four cores running at 1.9GHz and the other four at 1.3GHz, 3GB of LPDDR3 RAM, 32GB internal storage (expandable up to 128GB via microSD), an 8MP rear-facing camera, a 2.1MP selfie shooter, cellular connectivity compatible with 4G LTE networks, and a beefy 5,870 mAh battery.

As the Galaxy Tab S2 9.7, which runs Android 5.0 Lollipop-based TouchWiz UX, has been bestowed with the title of Samsung’s flagship tablet, it comes pre-loaded with the Galaxy Gifts application (worth a whopping $470), which gives customers exclusive access to a plethora of premium applications and services for a limited time, including three months of Evernote Premium, 6 free months of Endomondo Premium and much, much more.

If the Galaxy Tab S2 9.7 is a little too big for your liking, and you’re waiting for the release of the Galaxy Tab S2 8.0, we, unfortunately, have some bad news for you as Samsung has announced that it doesn’t have any plans to bring the 8-inch variant of the Galaxy Tab S2 to India in the foreseeable future as the company believes that the 9.7-inch model is better suited to public demand in the region.

If you’re based in India, like the sound of the Galaxy Tab S2 9.7 and would like to pick one up — hit the source link below.