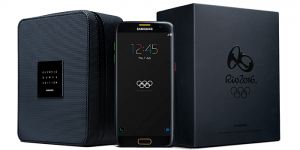 Just a day after it was made official, the Samsung Galaxy S7 edge Olympic Games Limited Edition has been made available to pre-order in Germany. The South Korean company has the device listed on its official website and is charging €879.

Unlike the standard Galaxy S7 edge, the Olympic Edition unit will come in a textured limited edition box, with an individual identification number (like GER-0001, or GER-0002 …, or GER-2016) embedded on it.

Only 2,016 units are up for grabs. So if you’re planning to pre-order one, you might have to act really fast. Shipments begin July 18, which is the official launch day. Aside from Germany, the device will also be available in the US, Brazil, China, and South Korea.