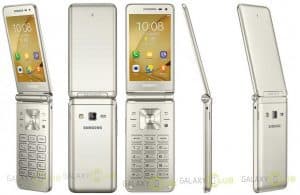 Samsung Galaxy Folder 2 has been a persisting member in our rumor section throughout August. First, it was spotted to pass through TENAA, then we saw a couple of leaked promo images. Yesterday we saw its first live photos leaked in the wild.

And today it’s time for another round of Folder 2 images – the official ones. While the device is yet to be announced, probably as Korea or China exclusive, its official images are already available for the public to enjoy.

The flip-phone is rumored to pack a 3.8″ WVGA display, and run on the Snapdragon 425 chip with a quad-core 1.4GHz processor and 2GB RAM. The rest of the alleged specs are 16GB expandable storage, 8MP/5MP camera setup, and a 1,950 mAh battery. The Android in charge of the Folder 2 is 6.0.1 Marshmallow skinned with Touch Wiz.

It seems we know pretty much everything there is to know about the Galaxy Folder 2, so the announcement should happen any moment now. Just don’t hold your breath for a global release, none of its siblings have enjoyed such.