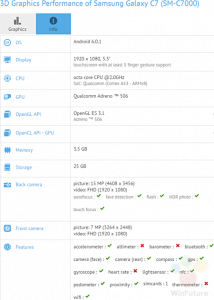 We knew that Samsung is working on a new ‘C’ series of smartphones, with the Galaxy C5 already being the subject a few leaks and the C7 was shown on AnTuTu. Now, the latter has been spotted on GFXBench as well, revealing a 5.5-inch display.

So it’s worth mentioning that Indian import export site Zauba lists the SM-C7000 with 5.7-inch display – so, there’s still a contradiction there.

The Galaxy C series is rumored to feature thin metallic bodies, and is expected to launch sometime next month. It is, however, expected to be exclusive to China. As for the pricing, the only reference we currently have is the Zauba listing, which reveals a tag of INR 13,635 (around $205) for the C7.