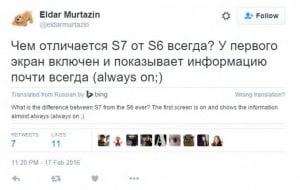 There have already been rumors about Samsung‘s upcoming Galaxy S7/S7 edge flagships sporting an Always On display, and there has been some credible information as well.

Now, adding weight to these previous reports, Russian tech blogger Eldar Murtazin – who has decent track record when it comes to smartphone leaks – has also confirmed the same.

Both devices are set to be unveiled this Sunday – February 21.