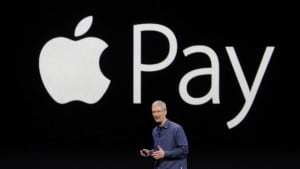 Apple has reportedly been telling potential partners that it will allow users to pay on mobile websites just as easy as scanning their fingerprint. The feature would only work on Apple’s Safari mobile browser as it is integrated into the OS.

There was also some talk of possibly bringing Apple Pay to desktop websites. Perhaps actually building a TouchID sensor into a Mac would make the feature work perfectly. However, we don’t know when/if that will (ever) actually happen.

If Apple does decide to launch such a feature, it’d likely be launched during Apple’s annual World Wide Developers Conference (WWDC). Apple reportedly plans to bring the feature before the biggest shopping season of the year.

PayPal needs to watch its back because it is among the biggest online secure payment services in the world and Apple Pay poses a big threat to PayPal’s transaction volumes.

Paypal has been promoting its new “Old Money V.S. New Money” ad. I absolutely love this commercial because it addresses the United States’ outdated bank and money system and put attention on “New Money” being more convenient and letting users taking control of their own money.