Oppo R9 and R9 Plus unveiling officially scheduled for March 17 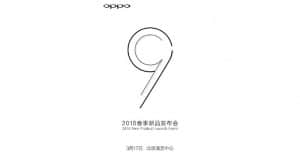 You can officially mark March 17 on your calendars as the announcement of the camera-focused Oppo R9 and R9 Plus.

Both phones passed through TENAA and will bring all-metal bodies and AMOLED screens. The R9 will have a 5.5″ 1080p screen, the R9 Plus will be bigger with a 6″ 1080p screen. Both have octa-core processors with 4GB of RAM and 64GB storage (before you put in a microSD card in the hybrid slot) and will run Android 5.1 Lollipop at launch.

As for the camera, they will have 16MP sensors on the front and back (yep, 16MP selfies!). It’s not clear if they will feature the sensor-shift image stabilization tech Oppo demoed at the MWC.

They will have VOOC rapid charge for their 2,850mAh (R9) and 4,120mAh (R9 Plus) batteries. It won’t be the Super VOOC from MWC, though, that tech is still in development.