OnePlus 3T will be cheaper in China? 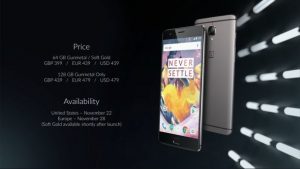 When the OnePlus 3T was announced last week, its US and European pricing information was revealed – the device will carry $439 and $479 price tag for the 64GB and 128GB variants, respectively, in the US, while in the EU the prices will be €439 and €479, respectively.

Now, a new rumor has revealed the expected price tag the handset will carry in China.

Needless to say, none of this is officially confirmed, so take it with a pinch of salt.