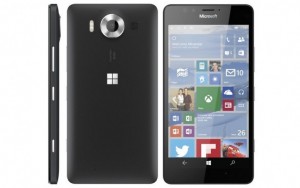 A new leak has surfaced online, confirming some of the already-known key specs of Microsoft‘s upcoming Lumia 950 XL smartphone. The said leak is in the form of a screenshot of the device running build 10547 of Windows 10 Mobile (shown below).

The screenshot above confirms that the Lumia 950 XL will be powered by a Snapdragon 810 SoC, and sport a 1440 x 2560 QHD display. It was also confirmed that the handset will have 3GB of RAM. 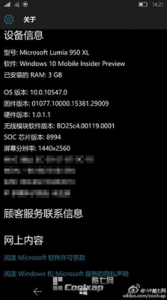 Other specs that we already know are: 32GB expandable storage, 20 MP rear camera, 5 MP front shooter, USB Type-C port for charging, and 3,300 mAh battery. As for the price, a recent leak suggested that the dual-SIM variant will carry a tag of around $840, at least in Europe.