Microsoft Lumia 950XL will come with a removable battery 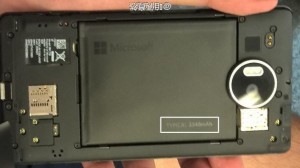 Microsoft‘s long-overdue flagship smartphone announcement is scheduled for October 6 (yes, tomorrow) and we’re expecting the Lumia 950 and 950 XL to finally become official. The two devices have starred in a number of leaks, as well as a suspicious in-house campaign, which saw the phones “mistakenly” listed on official company sites.

Anyways, this latest bit is a little more shady, and appears to be a genuine leak. The lone photo pictures the larger Lumia 950XL with the back cover out of the way granting access to the removable battery. The cell is neatly tucked underneath the oversized camera module.

The other interesting piece of info is the battery capacity, which is claimed to be 3,340mAh. Now, while this seems like a reasonable capacity and may indeed be the actual number, a few flags get raised.

For one, the fonts seem inconsistent, between the “typical” and the “3340mAh”. Additionally, it makes little sense to print just the capacity on the front of an otherwise minimalist design, when there’s inevitably detailed information on the flip side. A safe bet would be that whoever took the shot knew the capacity and wanted to include it in the photo. Or we may be overly suspicious.

Whatever the case, the big news is the confirmation that the Lumia 950 XL will have a user-replaceable battery. The feature is becoming an increasingly rare sight among high-end smartphones, with LG the only one that is persisting with the G4 and the V10, so it’s good to know that Microsoft is in on it too.