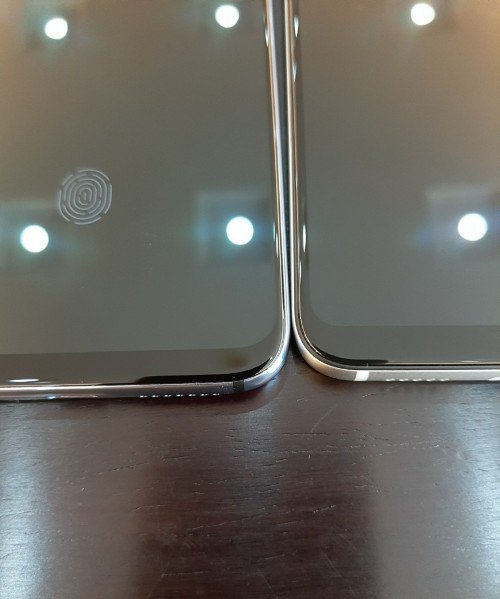 Meizu 16 and 16 Plus are set to be revealed in late August as the other incredibile Meizu flagships of the year. Today, a new photo flowed out on Twitter displays us a part of the front panel of the next top-end devices, and it allows us notice major details about its show. First of all, the two devices shown in the photo have a slightly different design. We suppose that the one on the left is the Plus variant as it looks greater and it has a narrower bezel on the lower part, while the one on the straight must be the standard version.

It is easy to notice the presence of an in-display fingerprint reader on the alleged Plus version as there is a fingerprint icon on the display. Meizu 16 and 16 Plus have a sleek metallic body which houses a USB Type-C port and two grilles, probably one for the speaker and an additional for the microphone. At least on the Plus variant, bezels seem to be narrower than the Galaxy S9 line-up and this matches with recent declarations of the company’s CEO and founder Jack Wong. Given the presence of an in-display fingerprint reader, it is kinda sure that the Meizu 16 Plus will function an AMOLED panel as this tech only works with OLED panels.

Even though they will have narrow bezels and their screen-to-body ratio will be high, the 2 devices will not function a notch but a classic 18:9 screen. Under the hood, both Meizu 16 and 16 Plus will sport an octa-core Snapdragon 845 SoC, the perfect chipset by Qualcomm which could run at a max frequency of 2.8 GHz. Recently, Jack Wong has implicitly hinted at the fact that the most strong variant of the new flagships will not price tag more than 4000 Yuan, what roughly translates into $514 at the actual replace.