LG G5 with modular design, dual camera on back unveiled 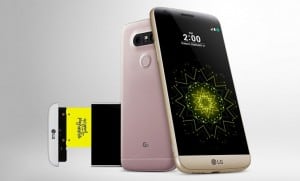 Meet the LG G5 – the first mainstream modular phone! There have been attempts in the past, the most recent being Google’s Project Ara, but none has found mainstream success.

The G5 has a “fluid metal” body and beveled glass on the front; not even antenna slits spoil its perfect lines. There is a single seam, which separates the bottom part.

That’s the modular component – it can be removed to access the battery and card slots, and one of several add-ons can be inserted (this requires a reboot though).

The first add-on is a camera grip, the LG Cam Plus. It adds 1,100mAh battery and hardware controls – a hardware shutter key, a video button, zoom dial. Then there’s a Bang & Olufsen DAC for even better audio quality. LG will open the standard for third-party manufacturers to create even more add-ons. 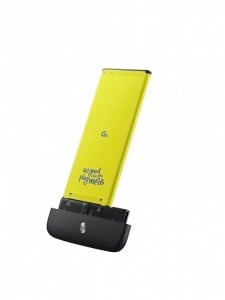 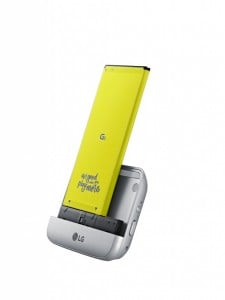 One of a kind screen, unique dual camera

Back to the LG G5, it has a 5.3″ LCD with an always-on mode. It features a dedicated memory and a power-sipping secondary chip so that the main chipset can go to sleep while the screen remains on 24/7. The bespoke chip sips just 0.8% of battery per hour.

The dual selfie camera idea from the V10 has migrated to the G5 too, but as a main camera. One camera has 75° Field of View (FoV) and 16MP sensor, the second camera is much wider, 135° and 8MP sensor. Images from both cameras can be merged with various effects and a real-time preview.

Finally, the “regular” specs. The LG G5 is powered by a Snapdragon 820 chipset wtih 4GB of RAM. It has 32GB storage on board and a microSD slot. It’s 7.5mm-8mm thick and packs a small-ish 2,800mAh battery. Below the dual-camera is the fingerprint sensor.

The LG G5 will launch in early April in the initial group of countries.