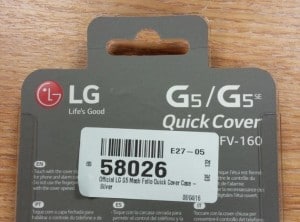 Last week word got out that “LG G5 SE” was trademarked by LG in its native South Korea, a move which naturally made us think the company would use that name for an upcoming smartphone. However, we assumed it would be a smaller model, thus emulating Apple’s strategy with the new iPhone SE.

It turns out that’s not going to be the case – because, while the G5 SE is real (and coming soon), it will intriguingly share dimensions with the plain G5.

The revelation comes from the packaging of the official LG-made Quick Cover case for the G5. This has arrived in stock at one UK-based retailer, and as you can see it’s compatible with two LG phones: the G5, yes, but also the G5 SE.

That clearly rules out the G5 SE being some kind of smaller flagship handset from the Korean company. Its dimensions should be very close to those of the G5, if not identical, for it to be able to fit inside the same case that’s tailor-built for the G5. So the differences between the two could have to do with design, materials used (the SE might, for example, be made out of plastic), or hardware innards (with the SE possibly turning out to be lower-end than the G5).

Since this case is about to go on sale everywhere the G5 already has, everyone will soon know about LG’s G5 SE – so the company may as well unveil it sooner rather than later.