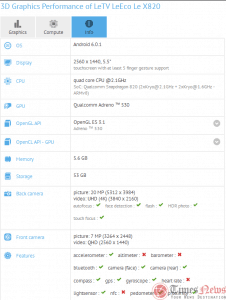 A new GFXBench listing of the unannounced LeTV LeEco Le X820 smartphone has just revealed that it will feature 6GB of RAM and will be powered by the Snapdragon 820 chipset. This will be the second smartphone to feature 6 gigs of RAM as previously Vivo XPlay 5 featured the same amount of RAM. This device is expected to launch as the LeTV LeEco Le Max 2. Letv Le Max 2 (X821) was spotted on AnTuTu with 4GB of RAM and Le X621, Le X620 and Le X525 has got the TENAA approval this month already with 3GB RAM. So the company is expected to launch the multiple variants of the device with 3GB, 4GB and 6GB of RAM.

The phone also has a 5.5-inch QHD touchscreen, a 21 MP rear camera (with 4K video capture), an 8 MP front-facing snapper (which can record QHD video), and 64GB of storage. It’s powered by Qualcomm’s Snapdragon 820 chipset, as you’d expect given the other specs here. The new LeEco smartphone runs Android 6.0.1 Marshmallow.