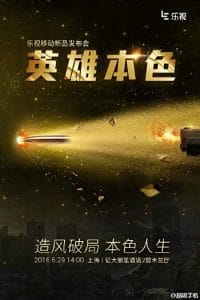 LeEco (formerly LeTV) is holding a product launch event towards the end of this month (June 29 to be precise) in Shanghai, China. This was revealed by the Chinese company in a teaser.

While the teaser doesn’t reveal anything about the star of the event, reports say the company will be unveiling a new flagship smartphone. And it won’t be just another flagship – the phone in question is said to be the world’s first Snapdragon 821-powered device.

Now, in case you don’t already know, Qualcomm has reportedly already renamed SD821 to SD823. So by that logic, these new reports are inline with a rumor earlier this month that said LeEco will out a Snapdragon 823-powered smartphone in June.

Moving on, other rumored specifications of the handset are worth mentioning as well, including a whopping 8GB RAM, and a 25MP rear camera unit. Now, these are inline with another recent rumor that even revealed the device’s price: CNY 3,000 ($455/€€405).

If you recall, it was LeEco that launched the world’s first SD820-powered phone, so we just can’t dismiss the latest rumor as just hot air. But still, none of these have been officially confirmed either, so take all this with a pinch of salt, at least for now.