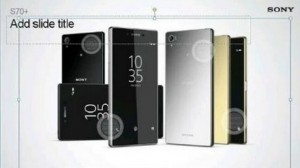 It’s not like you needed an image to know what the new Sony Xperia Z5+ will look like, but here’s one anyway. It looks like it was screen capped from an unfinished presentation about the upcoming phablet and it shows the classic Sony design.

You can barely see it in this image, but the side of the Xperia phablet will have a fingerprint sensor.

The Sony Xperia Z5+ may launch with the Z5 and Z5 Compact at IFA, though knowing Sony it could be held back to launch as an upgrade a few months later. Current info points to a Snapdragon 810 chipset though so it’s not clear how much of an upgrade it will really be.