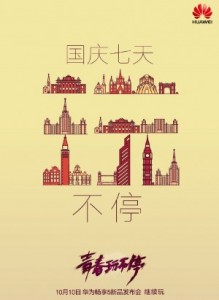 In just a few days Huawei is apparently set to announce a new dirt cheap Honor-branded smartphone. This will be the new member of the Play family, which so far has included the cheapest Honor handsets. It will be called Honor 5X Play (or a variation of this, such as Honor Play 5X).

Huawei has officially announced that it’s holding an event on October 10, which will be all about a youth-focused phone. And since both previous Play offerings were also youth-oriented, it seems very likely that the Honor 5X Play will be the star of the show.

The phone has already been certified for sale in China by TENAA, and through that process most of its specs have been made public. Thus, the Honor 5X Play will come with a 5-inch 720p touchscreen, a 13 MP rear camera with LED flash, a 5 MP front snapper, MediaTek’s MT6735 SoC with 1.3 GHz quad-core CPU, 2GB of RAM, 16GB of expandable storage, and a big 4,000 mAh battery.