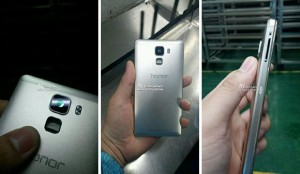 Both new Honor 7 series variants have been built using the aircraft grade metal to wrap the powerful hardware inside. The two Honor 7 variants pack same hardware except the difference in storage and RAM.

At the back will be a 13 megapixel camera with LED flash and optical image stabilization. Both devices will run Emotion UI 3.0 based on Android 5.0 Lollipop and pack 3,280 mAh battery.

Although the images show a fingerprint sensor slot under the rear camera, there’s no confirmation on whether it will exist at the release. Expected to be launched next month, the regular version is said to be priced at CNY 1,999 ($322), while the high-end variant will go for CNY 2,699 ($435).