Huawei Honor 4A details leak ahead of tomorrow’s unveiling 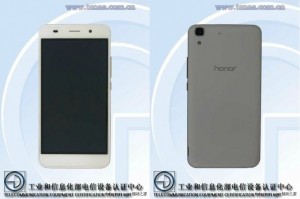 Last week we found out that Huawei is planning to add a new member to its Honor family. This will be called Honor 4A, and it’s due to be made official at a special event tomorrow.

And now, just one day before that, we finally get some leaked details about it. These come courtesy of TENAA, the Chinese equivalent to the FCC.

The agency has certified the Honor 4A for sale in the country, and this process has revealed that it will sport a 5-inch touchscreen and a 2,200 mAh battery. Its dimensions will be 143.5 x 72.1 x 8.5 mm. It will have dual-SIM support, and it should work on the networks of all the Chinese carriers.

That’s it from the official source, but some rumors have started circulating in China filling in the blanks. The display resolution is said to be 720p, while the SoC at the helm is expected to be Qualcomm’s Snapdragon 210, aided by 2GB of RAM apparently. The Honor 4A will reportedly come with 16GB of storage (presumably of the expandable sort).

Pricing information has sadly not been included in the rumors, so all we can say for sure is that the Honor 4A will be cheap. How much so is something we’ll only find out tomorrow, when it gets announced.