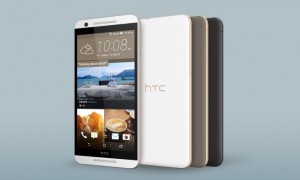 Here’s To Change – HTC’s motto, which the company took to heart. Small, continuous change and re-release of every model. This week it’s the HTC One E9s dual sim was put up on the HTC India website without any official announcement.

Not so much a variant of the One E9 – let alone a premium upgrade as the “s” suggests – this is more of a Desire 820 refresh. A 5.5″ 720p screen (the base E9 is at 1080p), thicker and heavier, but with a smaller battery than the E9, slower chipset too.Comparing the HTC One E9s dual sim to the Desire 820 is slightly more favorable, but even then it’s not a clear win against the late-2014 model. And reading the fine text produces yet more facepalm moments – like leaving 8.5GB of user-available storage on a 16GB device.

Anyway, the phone packs a 13MP camera on the back plus a 4MP UltraPixel selfie shooter on the front, a MediaTek MT6752M chipset (octa-core at 1.5GHz, 2GB RAM) and LTE connectivity with two SIM cards. It has stereo speakers and Dolby audio too.