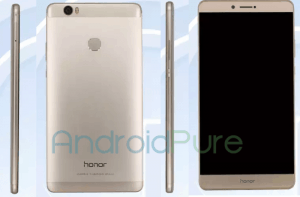 A new Honor has been spotted on Chinese mobile regulator website, TENAA. The certification is for a device with the model number EDI-AL10, aka as the Honor Note 8.

The phablet is quite a massive one, with a 6.6-inch Quad HD (2K) 1440p OLED display, which means it is bigger than the Xiaomi Mi Max (6.44″). In fact, the teaser did mock the Mi Max.he Honor Note 8 is powered by an octa-core processor clocked at 2.5GHz, which could be an in house Kirin chipset, perhaps the Kirin 950.

It has 4GB of RAM, 64GB of internal storage and supports an expandable memory of up to 128GB via micro SD. The photogrpahy options on the phone includes a 13 megapixel rear camera with dual LED flash, and an 8 megapixel front camera for selfies.

The Honor Note 8 is backed by a 4400 mAh battery, and sports a full metal body. The design does look awfully similar to most metal phones such as the Redmi Note 3. The Honor 8 features a rear facing fingerprint scanner. The Note 8 is quite bulky at 219g, but it is not surprising considering it has a massive screen and a mammoth battery.