It’s not Wednesday yet, but we’ve got a great Google first party Android app update to share. Rather than an app update in the traditional sense, today’s update is actually to the Google Play Store–and this new version packs quite a nice visual makeover that features a new and image-rich UI, as well as a hint of Material Design. 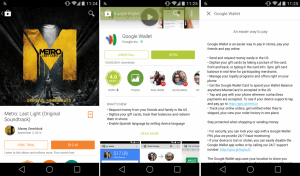 Today’s update to the Google Play Store brings the virtual storefront to version 4.9.13, up from version 4.8.22 that we shared just six days ago. And as you can expect from a relatively significant version number change, 4.9 brings a few very noticeable visual changes. For starters, when you access any particular Play Store entry–be it audio, video, apps, or written content–you are given a new image-rich listing page. This new style, which is seen in the leftmost screenshot, makes it easier to get a sense of your potential app purchase, as well as allow developers to create more enticing listings. In addition, Play Store listings now feature a floating action bar menu that fades into place when scrolling down any entry. This, along with a new and more prominent Google+ section can be seen in the middle screenshot. Finally, an updated “What’s New” section can be seen in the rightmost screenshot. This can be summoned by tapping on the section and dismissed by either clicking the “x” or scrolling up past the content.

The update isn’t complete in its visual transformation, however. When first launching the app, users won’t see any readily apparent changes. At this time, only the listing pages appear to be changed. That said, the update is a good move in the right direction, and we can’t wait to see the rest of the app’s visual makeover–perhaps in time for Android L and Material Design in the Fall.

While Play Store 4.9 has already begun rolling out, it will naturally be some time before everyone receives the update. As such, we’ve gone ahead and mirrored the APK  for your sideloading pleasure.

[Many thanks to XDA Recognized Developer febycv for the APK!]