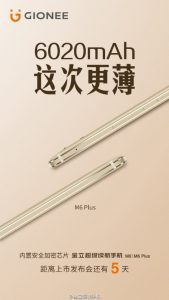 Ginonee is going to unveil its next smartphone in the lineup that goes by the name of Gionee M6. Previously, reports surfaced that Gionee M6 is going to feature a large battery and now it has been confirmed by the teaser released for the purpose. The smartphone is going to be launched on July 26 and the main highlight of the smartphone is the massive 6020mAh battery that it comes with. You can see the official teaser below which also confirms its elder sibling, the Gionee M6 Plus.

On July 26, we can expect Gionee to launch two smartphones i.e. Gionee M6 and Gionee M6 Plus. TENAA listing revealed that the M6 had a 5000mAh battery, so it should be the M6 Plus that features the larger 6020mAh capacity battery, as confirmed by the teaser above. That being said another feature worth mentioning is the presence of a security chip inside the smartphone. It has been reported that with this security chip inside, Gionee M6 is going to be one of the safest phones in the market with higher encryption levels.  This smartphone was previously spotted on certification website TENNA which gave away the looks and design of this upcoming smartphone.

Other features and specifications of this device are not known right now but we expect more details to emerge in the days to follow. Stay tuned for the latest updates on this smartphone.