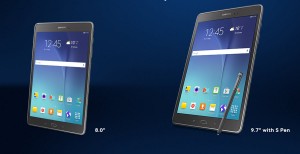 Both the Tab S2 8.0 and Tab S2 9.7 are said to be LTE versions of the tablet, but neither has an S/K/L variant letter (but instead, the number “zero” at the end) to indicate carrier variants – which means that these models will be sold to customers directly instead of through carriers (GSM tablets instead of CDMA carrier versions).

With Samsung getting the Tab S2 models certified in Korea, we have the first major sign that, like the US certification, Samsung’s preparing to launch the Tab S2 8.0 and Tab S2 9.7 soon. You can expect the Tab S2 models to feature Samsung’s homegrown, 64-bit Exynos processor, 3GB of RAM, a 2.1MP front camera, 8MP back camera, and 32GB of local storage with a microSD card slot for expandable storage. Both tablets will feature Samsung’s trademark AMOLED display, a 2048 x 1536 screen resolution, and a 4:3 aspect ratio. While no release date has been given, August is the same month in which Samsung released the Tab S last year.