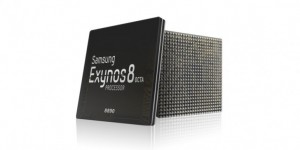 Rumors of the Samsung Galaxy S8 are starting to populate the tech space with the most recent one regarding the model numbers that would be assigned the to the Galaxy S8 duo.

A new rumor out of China says that the new Exynos 8895 chip will improve image processing by 70% and reach clock speeds of up to 3.0 GHz. Given that Samsung Galaxy S8 is expected to improve in the imaging department, we hope to see more demanding camera hardware that will make good use out of the new rumored chip.

The Exynos 8895 is also said to be Samsung’s first chip manufactured on the 10nm process and run at a max power draw of just 5 watts. The chip also allegedly scored 2301 for single-core and 7019 for multi-core in Geekbench.

If the rumors are to be true, we are looking at a really great chip for next year’s Samsung Galaxy flagship phone. We just hope that Samsung doesn’t switch the CPUs on us like they did this year where all US variants of both the Galaxy S7 (edge) and Note7 were powered by Qualcomm’s Snapdragon 820 instead of the Exynos 8890 that shipped in all other variants of the phone.