Following the Huawei Mate 10 Pro, the Honor View 10 is now in the process of receiving the update to Android 9 Pie. The rollout is also happening in Europe only at the moment, and as you'd expect it brings Huawei's EMUI 9.0 overlay on top of Google's latest OS version. The build is 9.0.0.108, and for now it's only out for the BKL-L09 model of the View 10. The rollout is phased, which means you may have a bit of waiting to do until it reaches your particular unit, so you still need to be patient. The good news is that the over-the-air update is now finally on its way. EMUI 9.0 brings...

Galaxy A8 specs and price leak – in Malaysia

Posted on 13/07/2015
We’ve shown you photos of the Galaxy A8, along with a price tag for Chinese consumers. A new photo leak, however, provides the specs that have been rumored along with a retail price for Malaysian consumers. In a Galaxy A8 poster leak provided by site Mdroid.my, the price for the device in question comes out to RM1,888, which converts to $500USD for the upcoming device. The Galaxy A8 will retail for 439 euros in China. There are a few things to note about this poster. First, it does have the signature “SAMSUNG” name in blue in the top right corner, which hints that the poster could be from the Korean manufacturer itself. Next, the name “Galaxy A8” shown in black, which seems to indicate the device itself is the one smartphone rumored to arrive as early as this week, rather than some other smartphone headed to the market days from now. The image itself is quite blurry, which may imply that it was taken in such a fashion to 1) somewhat conceal the specs so that the person in question couldn’t be detected, or 2) it was taken in a hurry because the individual likely didn’t want to be discovered with his or her “hand in the cookie jar,” so to speak. At any rate, the specs do match what we’ve learned about the A8: a 5.7-inch, Super AMOLED display, 1.8Ghz, octa-core processor (perhaps the Snapdragon 615, as we’ve said before), a thin, 5.9mm profile, 5MP front camera and 16MP back camera, along with a 3,050mAh battery, 32GB of local storage with a 128GB-capable microSD card slot, and Android 5.1 Lollipop aboard. Keep in mind that photo leaks such as these could always be the product of photoshopping, so take this with a grain of salt. At the same time, however, there doesn’t seem to be a reason to distrust the image (although looks can deceive). Samsung is all set to announce the Galaxy A8 this coming week, with July 17th pegged as the magic date for the phone’s China release. 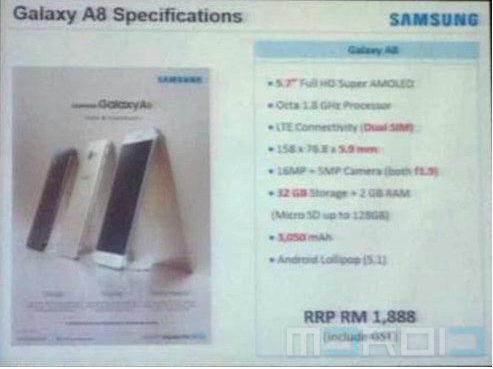 The Samsung Galaxy S8 had a busy night yesterday, but there's no time to rest - the first benchmarks are in, so let's see how the new flagship performs against the competition. Note that this is an Exynos 8895 unit, there's also a Snapdragon 835 version not included in these scores. Both should perform practically identically or so Samsung claims. We open up with a narrow win in AnTuTu 6 against the iPhone 7 Plus, which is still one of the best all-round performers. The performance increase from the previous Exynos chip is tangible and ahead of the Snapdragon 821 used by some of the...

Nokia 2 will be updated to Android 8.1 Oreo

The Nokia 2 was unveiled at the end of October as HMD Global's lowest-end smartphone to date. It arrived in stores in certain markets last month, running Android 7.1.1 Nougat. Having an older version of the OS on board is pretty much par for the course for an entry-level handset, so that's not surprising at all. However, the Nokia 2 will be updated to Android 8.1 Oreo. Shocking as that may seem, the information comes straight from HMD's Chief Product Officer, Juho Sarvikas, so it's as official as it can get. The Nokia 2 is probably the cheapest phone to get a confirmation of an Oreo update...