The model Beelink GS-King X ships in a black box with nice magnetic closure, have DTS and Dolby logos in the top cover. 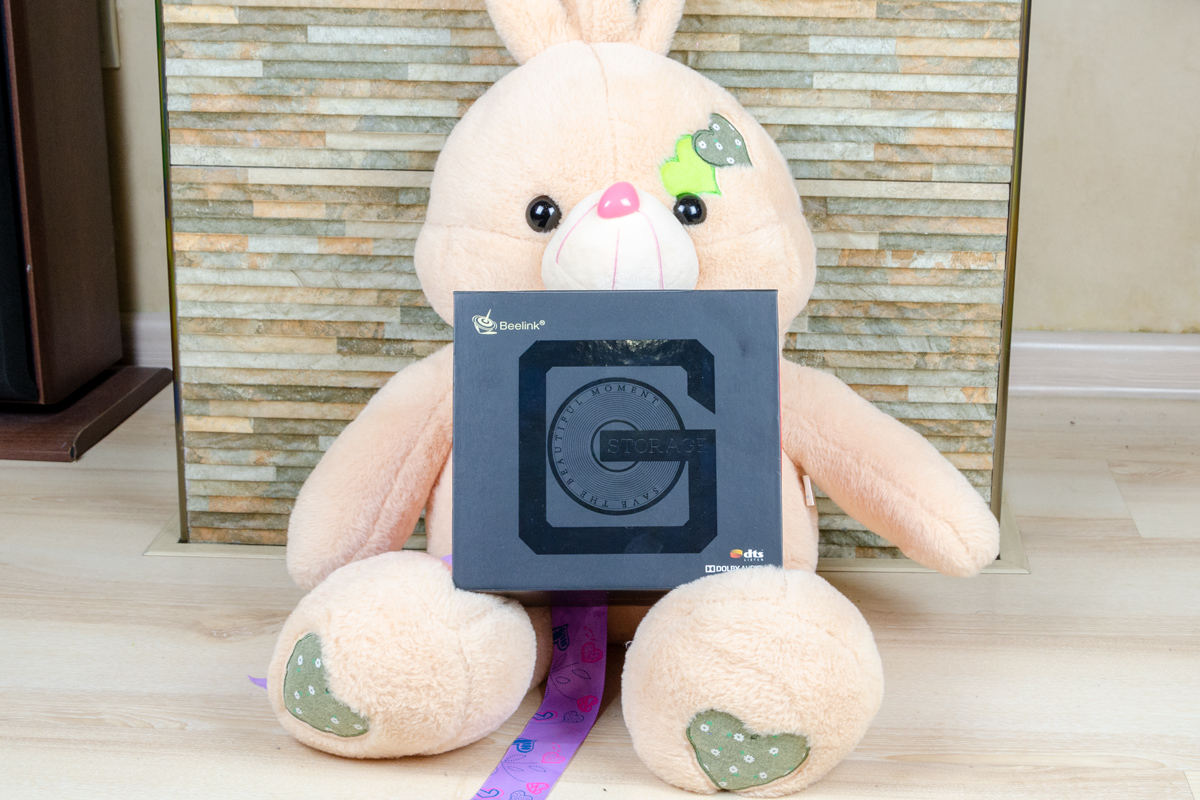 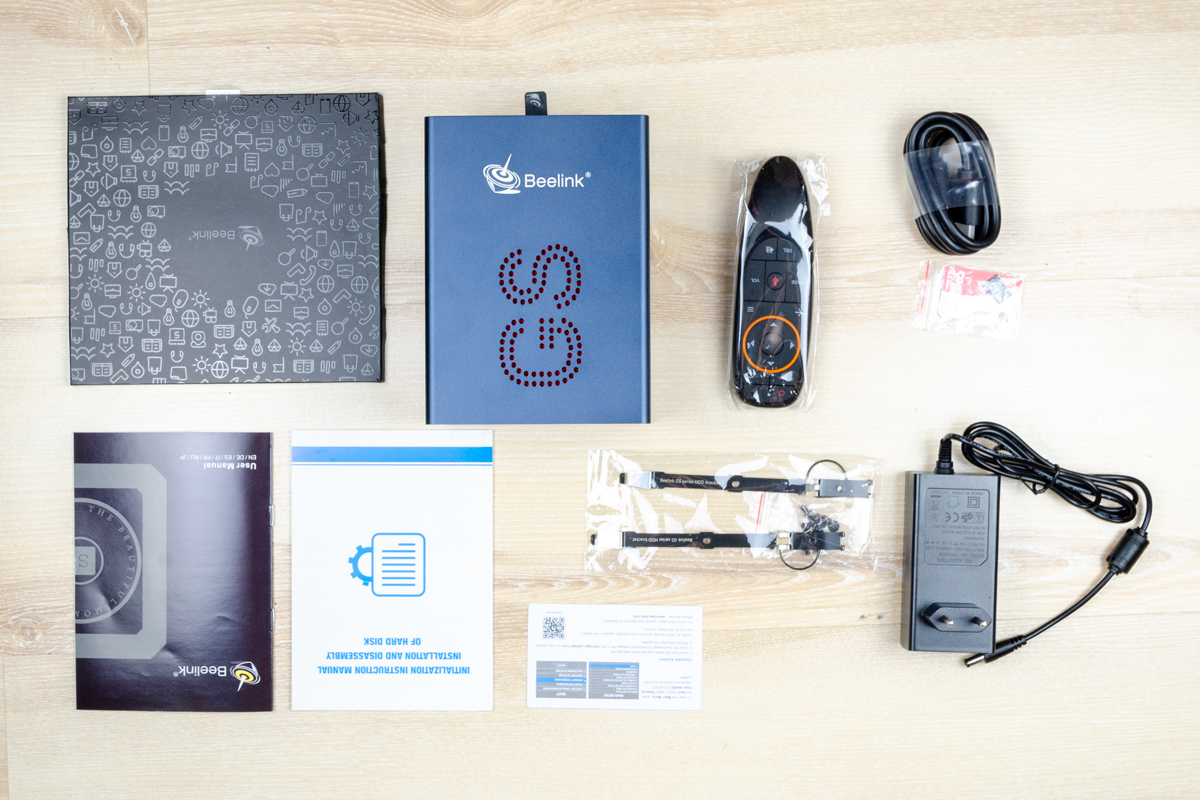 The TV-Box Beelink GS-King X has a spectacular metallic box with grills on each side.

On the front we have the drawing of a skull with LEDs in the eyes, they are green but in activity they are blue (Maybe a feature will be added to swap it off soon like presently you can only disconnect the cable to deactivate them) and power button, two USB 2.0 , microSD card reader. 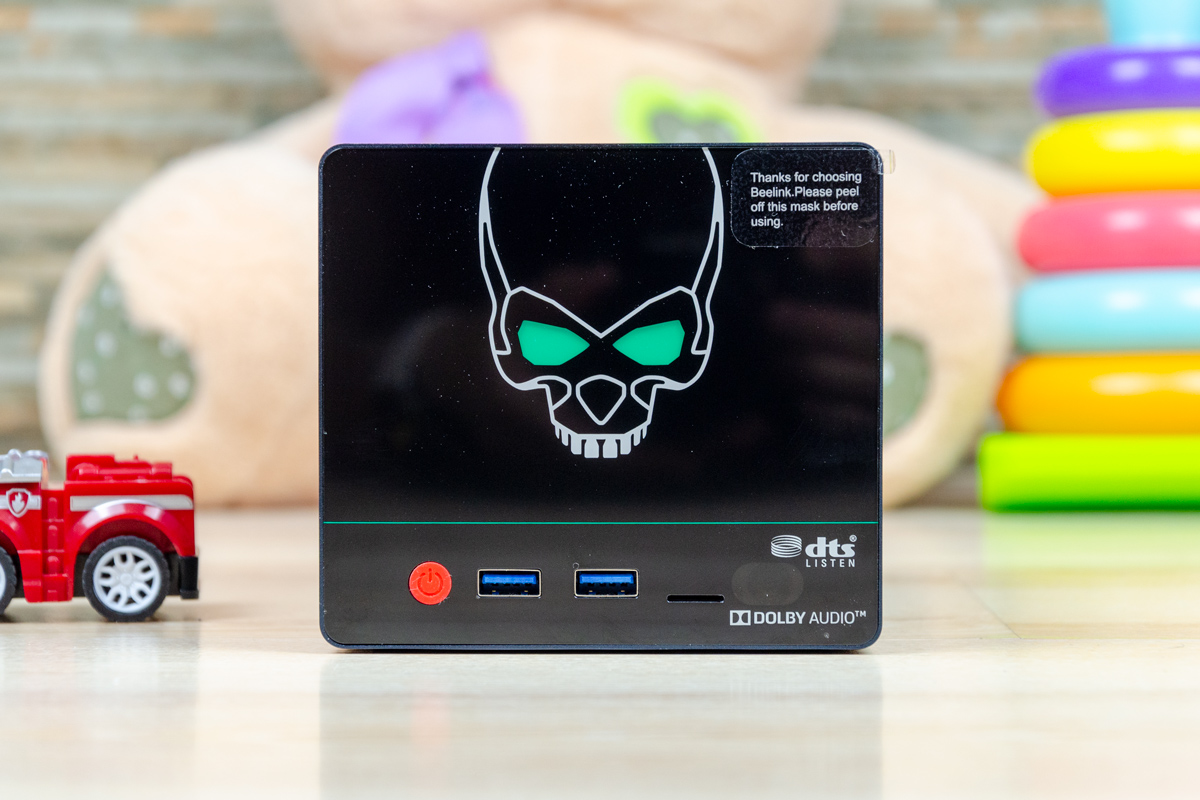 Also, a Flymouse RF controller with a microphone is included that enables you to use an on-screen pointer and give commands to Google Assistant by voice. 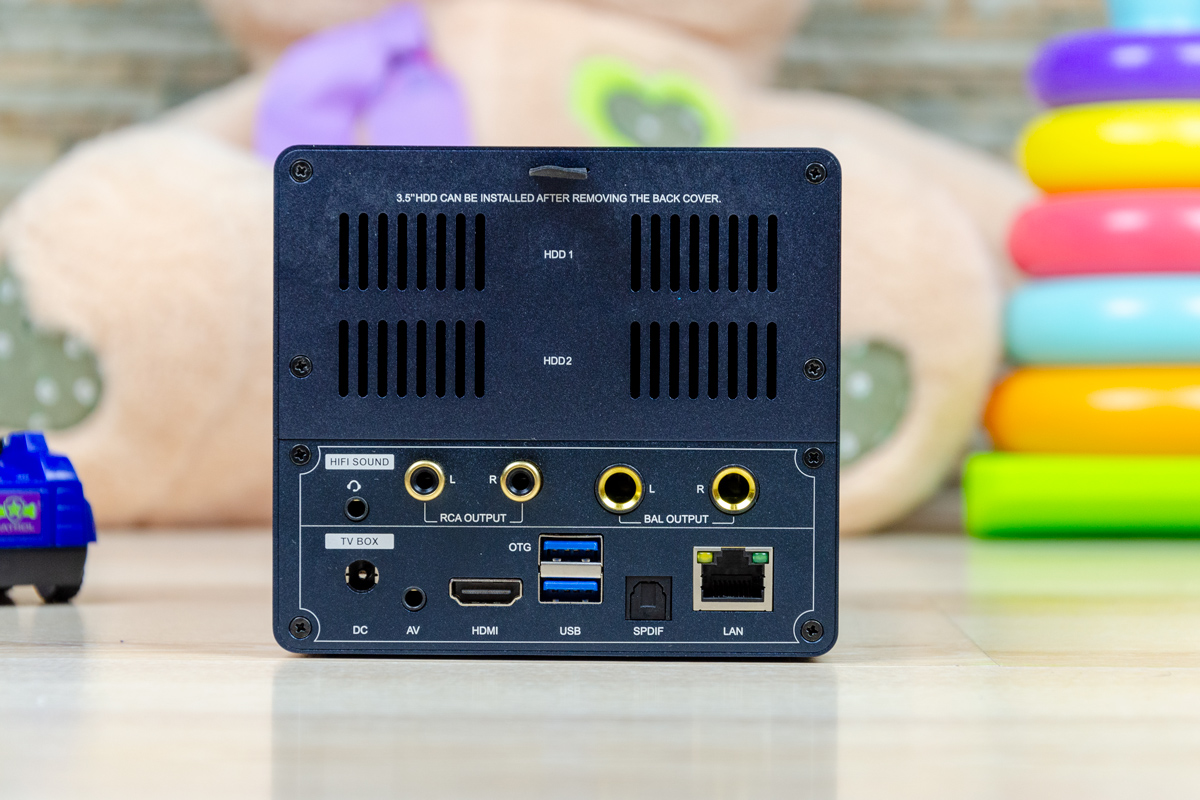 On the back there are HiFi headphones output, RCA output, BAL output, DC plut, AV aux, HDMI, 2x USB 3.0, SPDIF, gigabit LAN. After unscrew the cover inside we have  2 internal 3,5 disk bays with 2TB HDD included.

The included power supply is a powerful one – 3A: 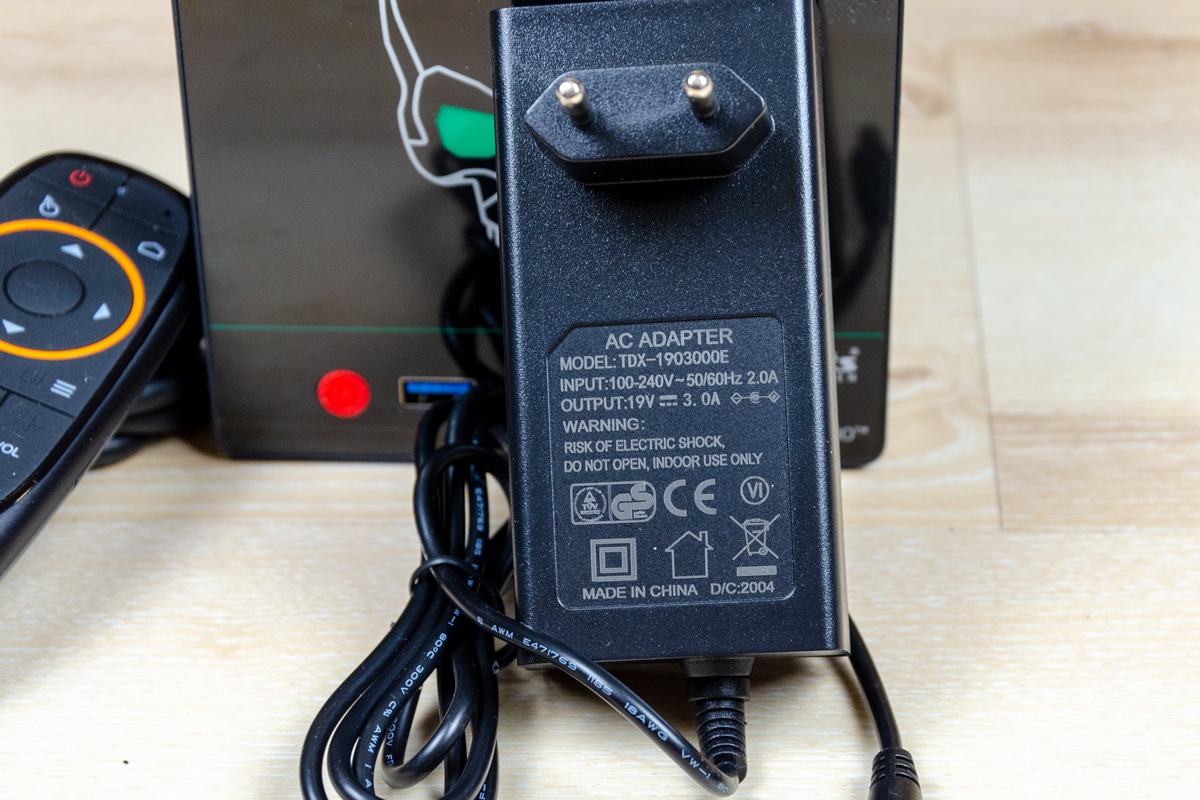 All specification are printed on the bottom of the box: 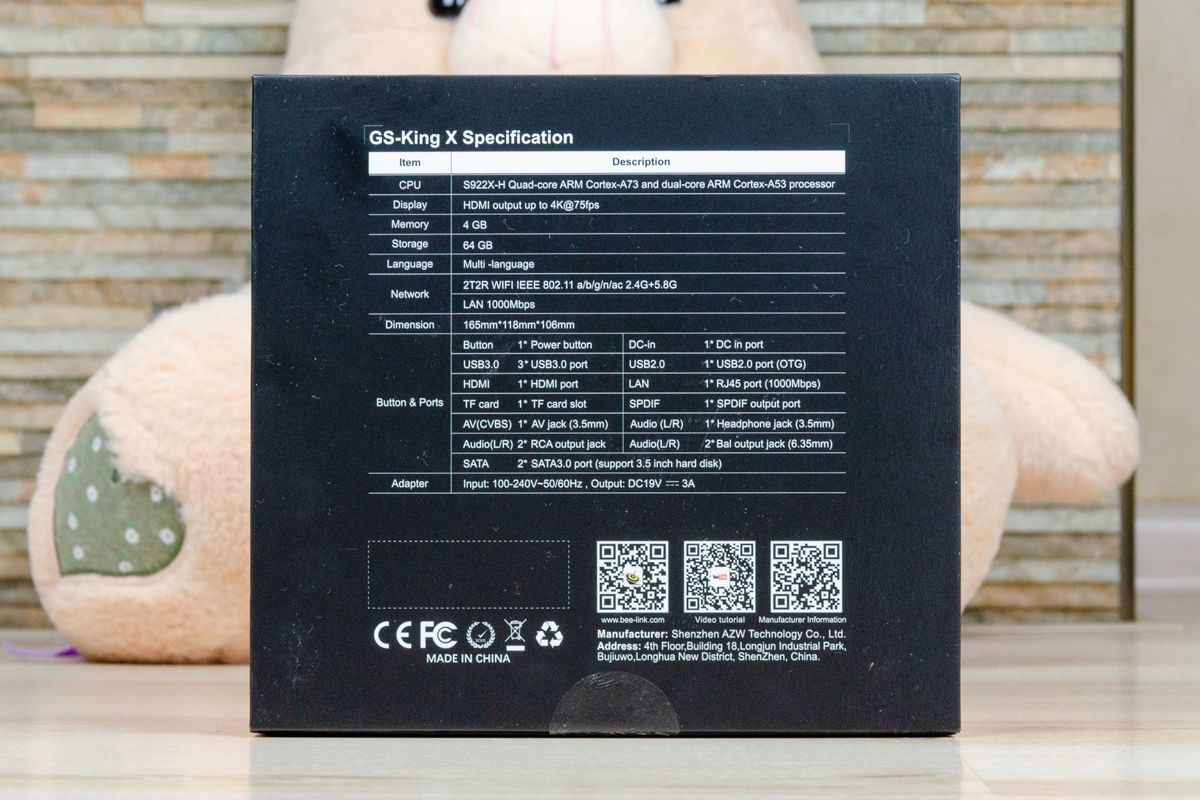 The TV-Box Beelink GS-King X ha installed 64 GB eMMC storage for internal storage + 4 GB DDR4 RAM, it has two USB 3.0 port, two USB 2.0 , microSD card reader and 2 internal 3,5 disk bays.
In the network section it has a wireless adapter Wifi ac 2×2 MIMO + BT 4.1 (AP6356SA) and Ethernet Gigabit port. And we can see in the tests the results the wifi reaches good speeds and the range is the right one for a model with two inner antennas.

Inside the TV-Box we have a double disk bay for 3.5″ disks with support up to 32 TB (2x 16 TB) as an external drive.
The Disk format is ExFat compatible (Sorry no NTFS)

On the bottom of the box, there is a tiny hole with access to the update button in case the firmware needs to be updated.
On the motherboard PCB, we could find the Wifi ac 2×2 MIMO + BT 4.1 CPU (AP6356SA) which has two inner wifi antennas.
The cooling system has an active fan which is good and the generated noise is not annoying but constant.

If you prefer to watch the video unboxing click bellow:

When we plug in the Beelink GS-King X a short setup needs to be done.

After complete startup, a simple launcher based on squares appears. It is designed for use with the bundled remote control and has few icons on the side that we could customize with the programs we need. 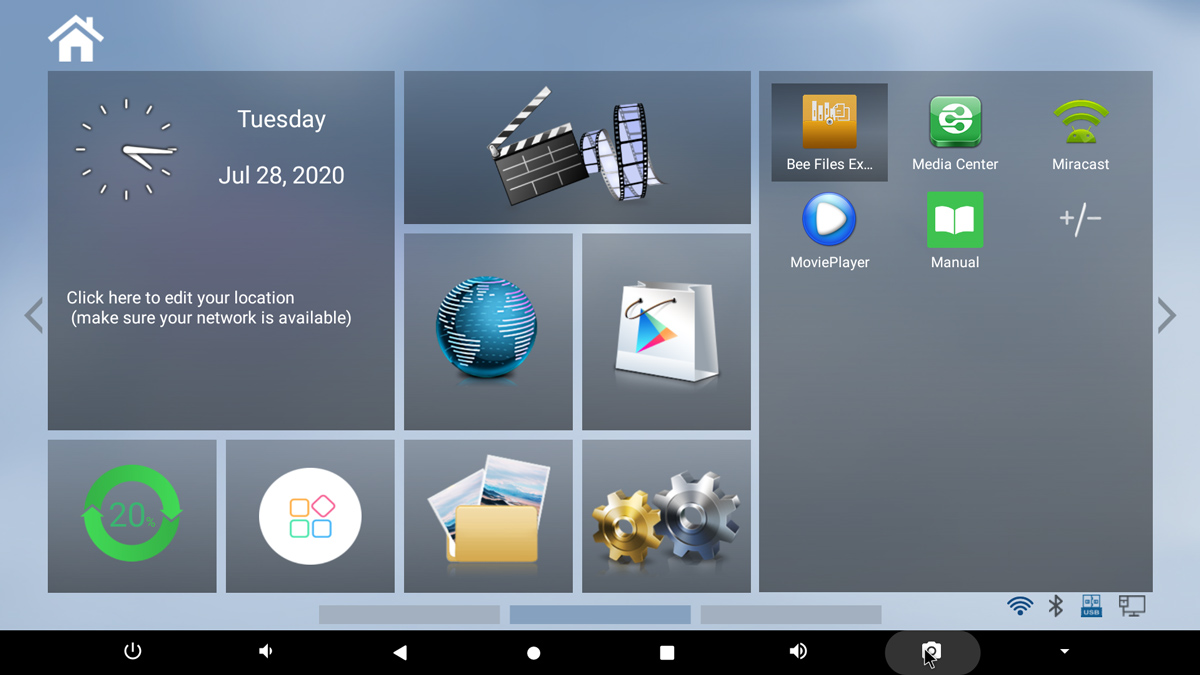 In the already installed programs, we could find Movieplayer, Miracast, Manual, Bee Music, and Bee File Explorer. The functionality of Android 9 is great in terms of desktop or heavy programs, works stable and without having forced closures in the applications.
Of course, we have Google Play and all the international Android languages are available.

After a quick check of the current version of Android and firmware, we see that a new version 915P0 which brings SAMBA functionality is available. 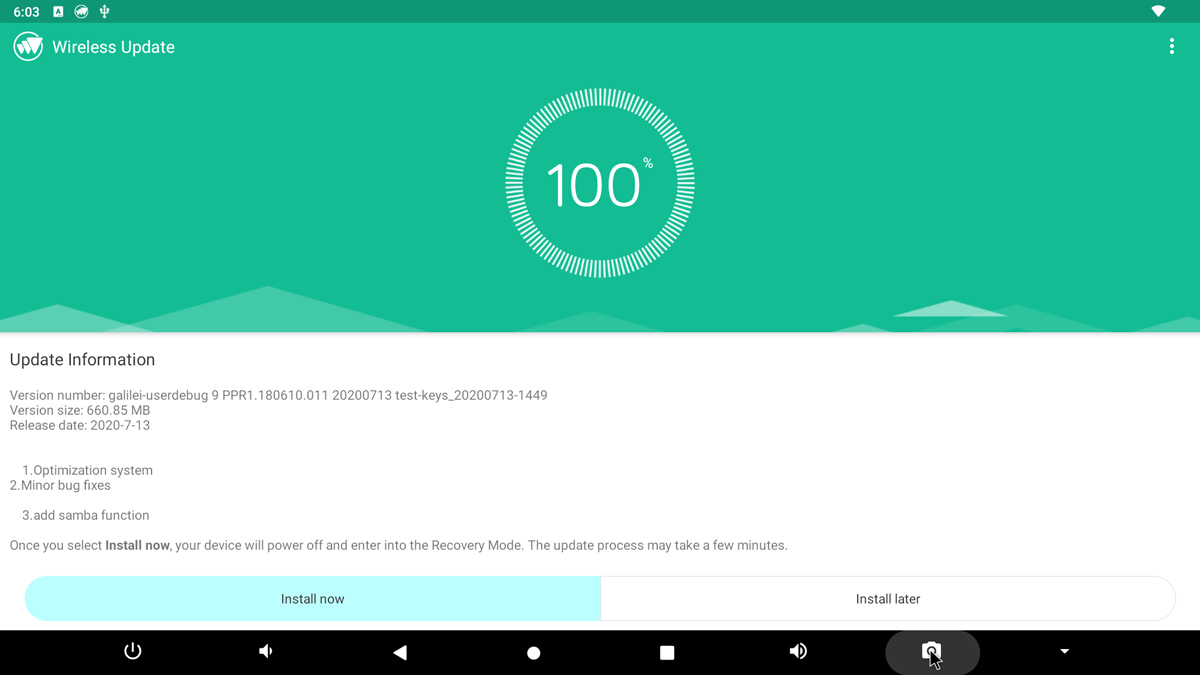 After download and install, we are back in the game 🙂
The Box is rooted by default so we can use the advantages of the Android system. Unfortunately, custom ROMs are not available yet.
Let’s not forget that the TV-Box we have a microSD card to boot the CoreELEC system in a dual form if we need that. 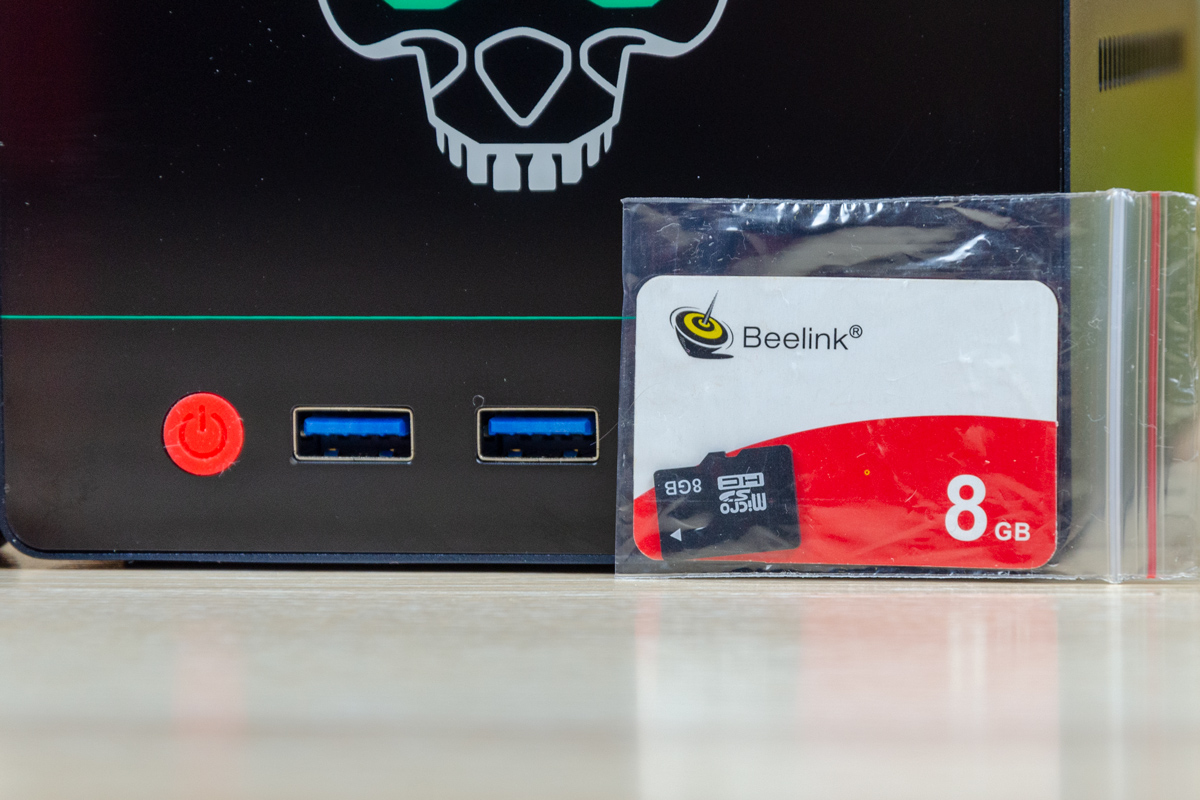 Since firmware variant 915P0 the Beelink GS-King X system have a SAMBA server setup in the settings menu. You could swap ON an consider which drives cna share the stored files. You have to take some points in consideration.

This TV-Box Beelink GS-King X has an associated NAS server service priced by WeLine and an app that lets us to access the contents of our TV-Box anywhere via wifi or information.
The system is easy to use but the connection speed is slow and not lovely efficient and requires buying credits because it has a limited transfer rate.
Beelink says that they will suggest an additional free different as a NAS server in a future update.

So if you need to try the existing NAS server download the WeLine app and register with the serial number on the sticker on the back of the TV-Box. Scan the QR code on the back of our smartphone to link it 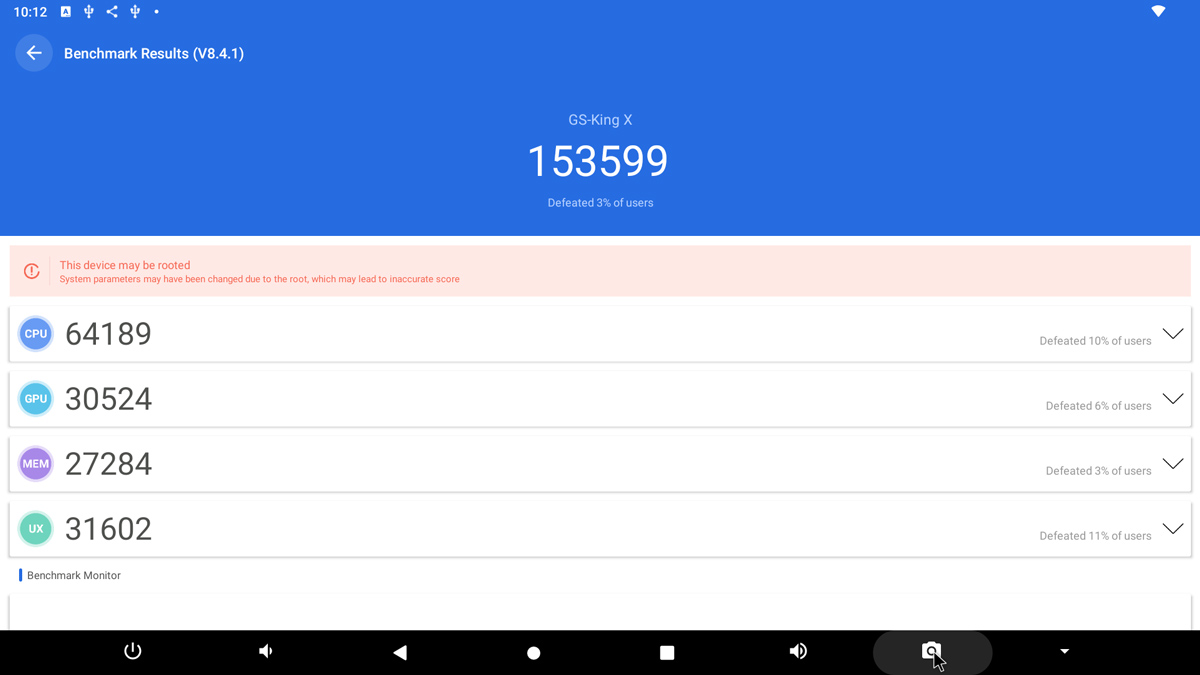 The Beelink GS-King X with S922X-J SoC is pretty effective and can run any Android app or game thanks to ARM Cortex-A73 + A53 processors with its Mali-G52 MP4 GPU is in the mid/high range.
This SoC is manufactured in 12nm and has a pretty small consumption. The temperatures are small thanks to the inner fan, the processor manages the speeds correctly and goes down to its minimum speed in inactivity.
Thermals start from 42ºC and working is 48ºC. the max I saw was 58ºC thanks to the fan wich noise is about 20db
As per power consumption when the box is off – 1.1W. Working at 19W and max 30W.

YES is possible to play titles like PUBG at low settings and run Emulators up to Wii with Vulkan support.
For better gameplay, we can use Gamepads by cable or bluetooth. 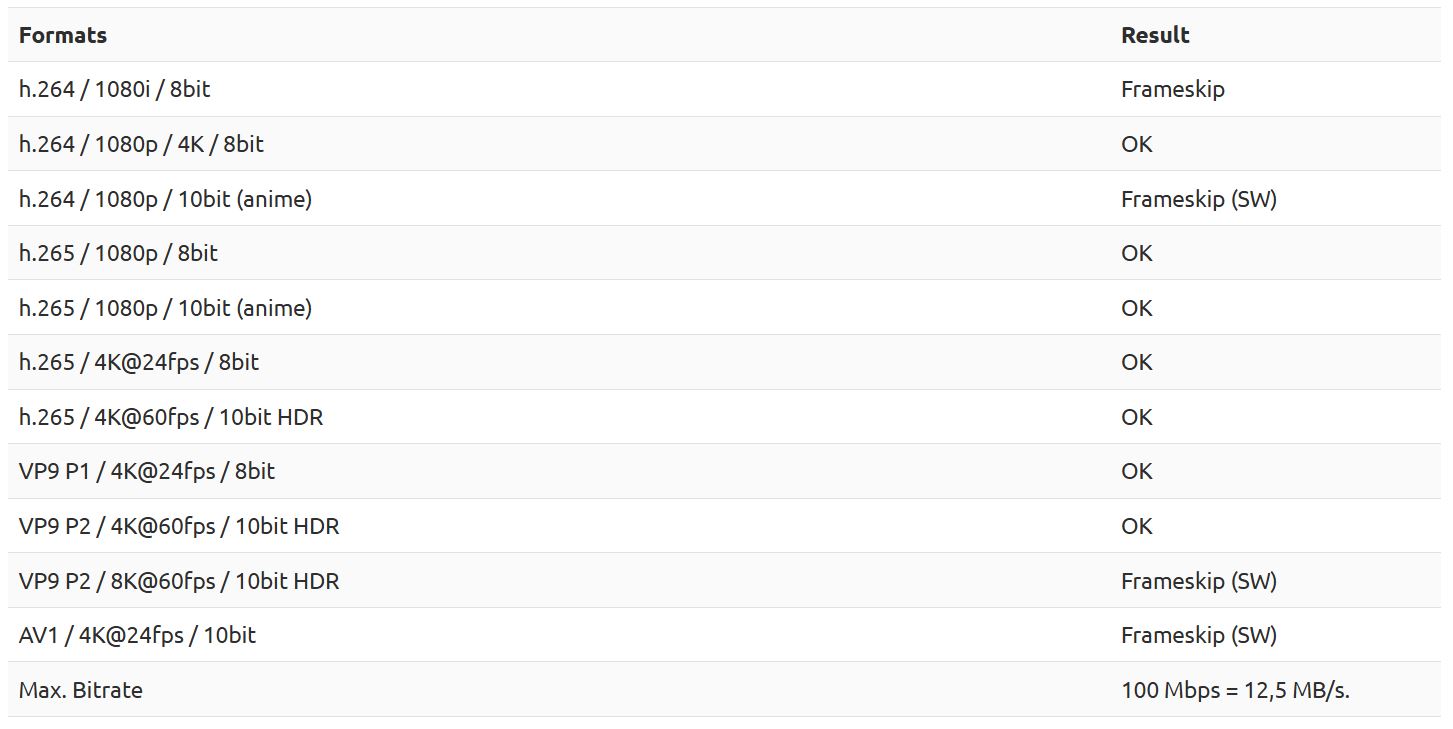 Players like KODI or PLEX can be used without the slightest problem so we can install them from Google Play. And about the audio, we could playback DD and DTS sound but we only have PCM sound due to a problem in the firmware (Beelink is working to fix it).
Due to the dedicated processors ESS9108 + RT6862 is possible to play with Lossless high quality.

Passing our tests with streaming services we check how the most well-known services work. The Beelink GS-King X presents the classic configuration with no certifications (Google Widevine L1) what limits us in quality in a number of streaming services, luckily if it is compatible with most services even if they are in its most basic quality of SD video 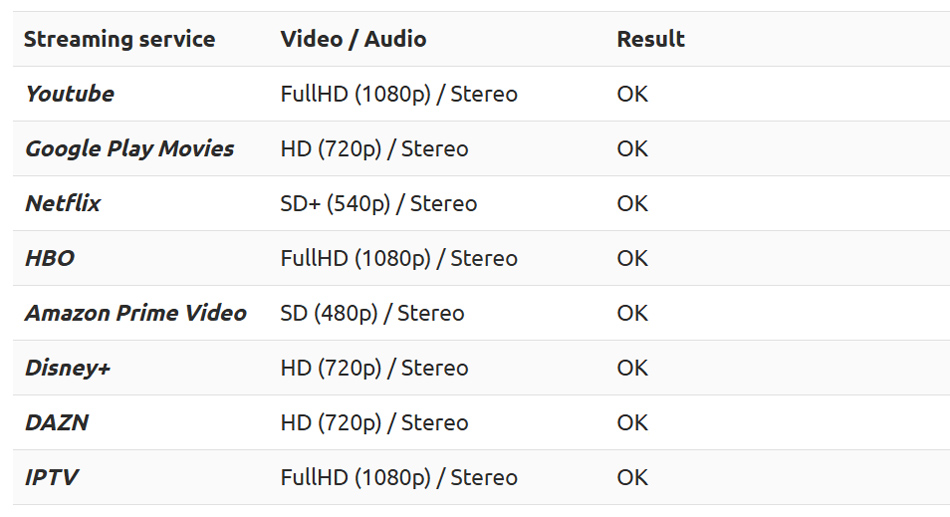 Beelink GS-King X offers an unconventional storage system (Two 3.5″ disk up to 32GB total, SAMBA server) with powerful Amlogic S922X-H SoC that can handle any app or games like PUBG.

Premium design with Hi-fi audio and many connectors. All streaming services are available (even not in FHD) and running great.

So in you looking for a small storage  server with powerful S922X-H SoC and dual system (Android 9 and CoreELEC) you should definitely buy it from the links below: