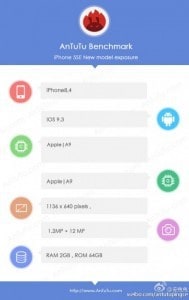 So, the new Apple iPhone SE went official yesterday and it’s very much an iPhone 6s internals in a 5s body. Well, almost…

As you’ve probably heard, the SE will not support Force Touch, but on the upside, AnTuTu detected 2GB of RAM – as much as the 6s has and double what the 6 and those before it had.

For one, the Touch ID sensor is the slower first-generation, unlike the 6s models (first-gen was also used on the iPhone 6).

The iPhone SE uses the M9 motion co-processor but lacks a barometer. This was used for activity tracking as a power-efficient way to estimate how much you’ve climbed (going up the stairs, for example, before that the GPS was used).