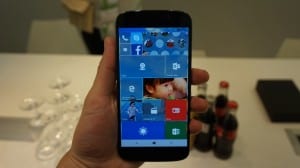 If you’ve been following the mobile convention scene for the past few years, then one particular trend has surely become apparent. CES isn’t quite what it used to be, with less and less OEM interest each year, but most major brands still tag along and bring at least a couple of things to show. Well, this year Acer didn’t skip the venue and brought an interesting Windows 10 handset, but it is hardly what you would call “new”.

The smartphone in question is the Liquid Jade Primo, which Acer apparently decided to announce for a second time, since it was promptly featured at last-year’s IFA. Back then it stood out from the crowd of other Acer Windows phones, like the Liquid M330 and M320, mainly because of its superior specs sheet and the presence of Windows 10 Continuum, which was still in its infancy and not rally featured in any commercial devices.

We could go ahead and excuse Acer for the double announcement, as the Jade Primo did serve more as a technology presentation platform back in September 2015, but its specs still remain unchanged since our first encounter, only now, the device is closer to end-user markets.

The Liquid Jade Primo is equipped with a 5.5-inch FullHD AMOLED display, runs on a Qualcomm Snapdragon 808 SoC and has 3GB of RAM and 32GB of internal storage. Its camera setup consists of a 21MP, f/2.2 rear shooter with dual LED flash and 4K video recording capabilities and the front-facing one boasts 8MP and an aperture of f/2.2.

As already mentioned, the Liquid Jade Primo runs on Windows 10 and one of its cornerstone features is Microsoft Continuum that allows you to leverage a PC-style productivity experience with a compatible dock, like the company’s new USB Type-C monitor. The only new piece of information about the handset concerns its release. The Liquid Jade Primo is said to hit the shelves in February in Europe, with a price tag of around $600. A US release will follow.